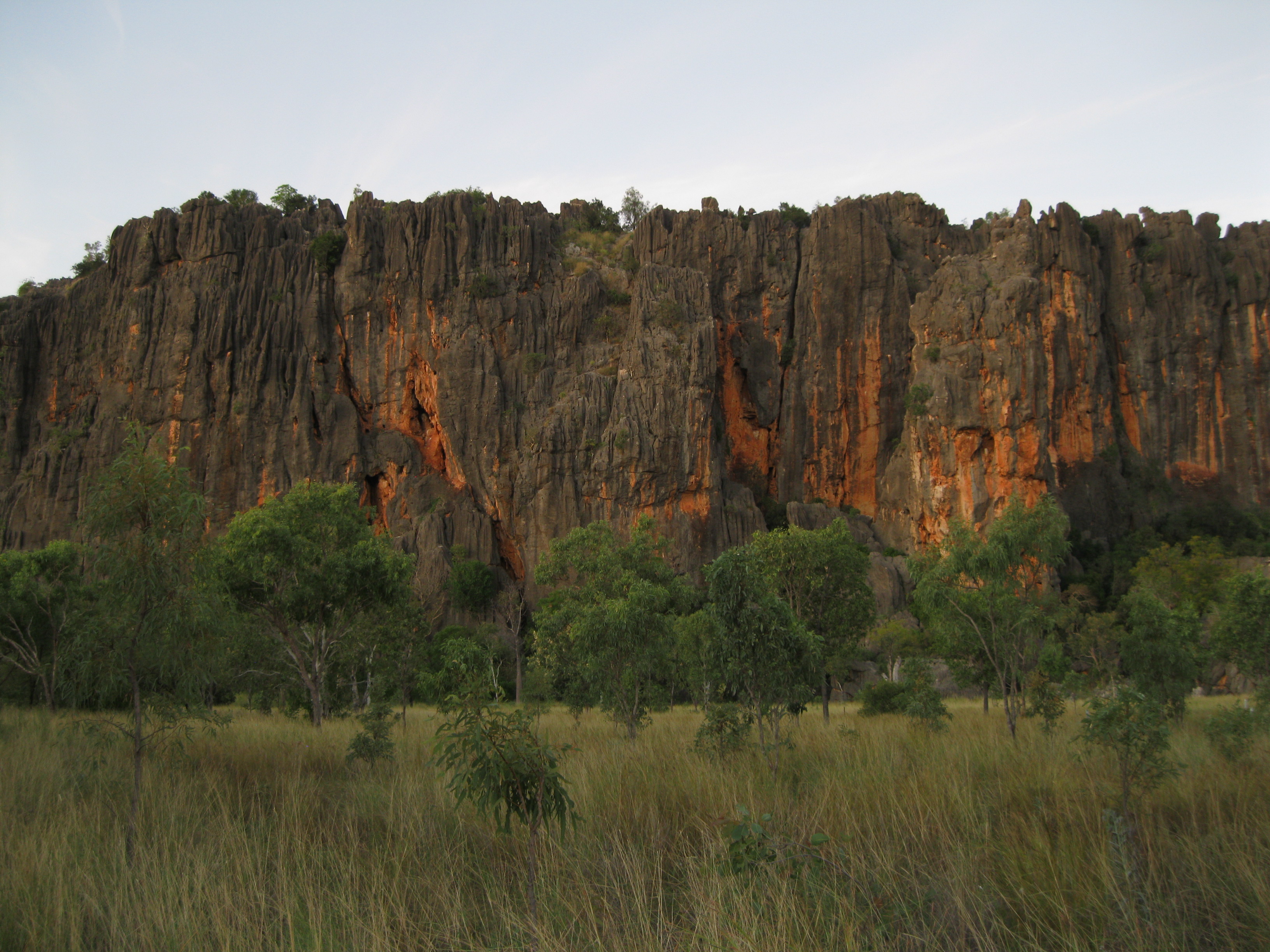 If you want to experience ancient stunning Outback scenery, then you should check out Windjana Gorge National Park. An awesome landscape dominated by massive rock formations that will blow your mind

The park is located 355 km (222 miles) east of Broome in the Kimberley region in the northern part of Western Australia. It was established in 1971 and consists of 20.5 square km (7.9 square miles) of spectacular scenery. If you are in the area you definitely have to pay the park a visit and explore.

Geology: The Formation of the Stunning Gorge

Windjana Gorge was created by the Lennart River carving its way through the 3.5 km (2.2 miles) long gorge of limestone. It was a part of a huge fossilised barrier reef from Devonian times about 350-375 million years ago when a tropical sea filled the Canning and Bonaparte basin.

The gorge also consists of small portions of mudstone, sandstone and conglomerate, the latter being coarse-grained clastic sedimentary rock. Remnants of the reef are preserved in the western Kimberley ranges of low rugged hills that extend for 350 km along the edge of granite country.

The gorge is paralleled by the King Leopold Ranges. The reef was probably 1,000 km long in the day and reached the Ningbing Range which is located north of Kununurra. The reef now forms a chain of steep sided ranges such as the Napier Range where Windjana Gorge is located.

Cross-sections in the reef can easily be seen on the walls in Windjana Gorge. It’s noticeable where flat-lying limestone adjoins steeply dipping beds. The flat-lying beds are black-reef limestone that were created in protected lagoons between the reef and the shore.

The steeply dipping limestone were at the front of the reef, facing the sea and were eroded by the waves from the reef top. Around the reef, mudstones, sandstones and thin limestone are located bordering the reef in quieter and deep waters. Here you may find fossils and more than 25 species of the prehistoric armour-plated fish (the Gogo fish) which dominated the Devonian times.

Camping fees apply and are payable along with a day pass fee at the self-registration station when entering the park. If you are with an organised group this will have been taken care of for you. It is recommended that you access the park with a 4WD vehicle. Bear in mind that the park is closed during the wet season as the roads are inaccessible. Water, toilets, showers and fireplaces are available between mid-April and mid-October. All firewood used has to be collected outside the park.

When arriving at Windjana Gorge National Park you will be met by the massive rock walls surrounding the gorge which is a very impressive sight and really blows your mind when you see it for the first time. In some places the walls reach 100 metres (328 ft) above the Lennart River.

After you have arrived and you have set up at the campsite, take a stroll over towards the massive rock wall of Windjana Gorge, which is the south eastern wall. It’s only a short walk from where you are based. This is a very impressive sight as it is such a gigantic rock wall created by the forces of nature in the middle of nowhere. All the surrounding scenery for miles is savannah woodland.

Walk up close to the wall, take it all in and take some awesome photos. You’ll see a magnificent high sheer rock face with rugged shapes and crevices, an astounding combination of colours of brownish grey with vertical orange streaks.

You will notice vegetation growing on the wall such as grasses and trees which is not only incredible but also a phenomenal sight. The rock wall is fronted by gum and boab trees and grasses. The closer you get, the more you will notice the rugged details and colours. It’s quite a mesmerising view.

You can do several walks in the park. The Savannah Walk is a 1 km (0.6 miles) return trip that takes you through the grasslands along the south eastern wall. Here you will see some of the plants and animals of the area. The eucalypts are the dominant trees in the Kimberley region as in the most parts of the country.

The Time Walk – During the Day

Another option is to do the Time Walk. Like the Savannah Walk this also begins from the camping area. This is a short walk where you will be exposed to fossilised marine life within the limestone walls of the gorge. You can see the ancient barrier reef where limestone have accumulated in horizontal layers.

This is only a 2 km (1.3 miles) return walk but it is fantastic. As you head into the gorge you will be approached by the massive rock wall facing the campsite and when you face it up close and look up towards the top, it is quite mind blowing how humongous it is.

When walking into the gorge you will continue along the other side of the wall to your right and the vegetation of Lennard River to the left. Opposite the river you are exposed to another stunning rugged rock wall. Just amazing.

You will get to a sign called “The Ages of Fishes” and at this spot you will find evidence of the ancient reef in the rock walls. If you investigate the wall you will definitely find fossils. Very cool. As you stroll on further down the trail along Lennard River, make sure you keep your eyes open for freshwater crocodiles as you may just spot a head and a pair of eye popping up from the water.

You will get to a point where you have reached a large beach area. Looking into the gorge from here back towards where you came from you will be faced by rock walls on each side of the pool for the first time.

This is also the place where the massive rock boulder called Bandilgan Rock is located. To the Bunubu and Unggumi people it’s known as Jula Bandilgan Rarrgi. It’s connected with other Jula sites in Bunuda country. As per the legend it can cause storms and strong winds if it’s not respected or if disturbed. Do not climb the rock and respect the cultural significance. These Jula sites are honoured through song and ceremony by the Bunuda people.

After you’ve checked out the gorge view and the Bandilgan Rock, head down to the opposite shore of the beach. Here you will have yet an amazing vista of a rock wall and the Lennart River stretching down along where the track of the Gorge Trail goes.

If you want to continue further you can actually head down along Lennard River and do the Gorge Trail which is a 7 km (4.4 miles) return trip. Bring at least 2 litres of water if you do the whole hike, a hat and apply sun screen. It will take you through the gorge of towering walls at the Lennard River where you will also be exposed to beautiful vegetation, a variety of rugged peaks and stellar cross-bedded rock walls.

You will walk along the sandy riverbed which unmarked for the most part. Allow 2-3 hours for the hike. Bear in mind that there may be obstacles that have washed down during the last flood. A sign at the end of the trail indicates when it terminates and you have to turn around. You will see the profile of the Devonian Reef and how shade and soil moisture affect where plants grow.

The Time Walk – During the Night

It’s really cool to take a stroll down the Time Walk at night. Bring a good and bright torch, flash it into the river and you will get the reflection of many crocodile eyes out in the water. As mentioned earlier, these are all freshwater crocodiles, so they are not dangerous.

This is such a cool way to spend an evening after you have had your dinner. Do make sure that you have sufficient batteries for your torch as it will be pitch black. The better torch light the more you will see. If your torch has a long reach, the better the experience.

The freshwater crocodile, also nicknamed freshies by the Australians, only appear in the northern part of Australia in Western Australia, Northern Territory and Queensland. Their main habitats are lakes, swamps, billabongs and upstream areas from rivers.

It is very unlikely that they will be in areas where estuarine (saltwater) crocodiles are present as the latter do not tolerate them. The freshwater crocodiles are small. The females grow to be around 2 metres (6.6 ft) and the males around 3 metres (9.8 ft). Growing to this size will take about 30 years. They weigh around 90 kg (198 pounds) as opposed to an estuarine crocodile which weighs around a ton (2,205 pounds).

Crocodile watching may not be possible at Windjana Gorge in the future because of the wide spread of the cane toad. This toad was introduced by the Bureau of Sugar Experiment Stations in 1935 to eat native beetles as they were harmful to the sugar cane crops.

Not only does cane beetles eat the leaves of the crops but their larvae feed on the roots. Initially 102 cane toads were released in Queensland and now there are more than 200 million across Queensland, Northern Territory and Western Australia. They have become an environmental disaster as they spread diseases and there has actually never been any proof that they were able to do the job of eating the beetles.

The major issue is also that it has a poisonous gland which kills the native animals such as the freshwater crocodile and it is a huge concern as there is also a decline in the number of several other native species such as goannas and snakes.

Experts have tried experimenting with training freshwater crocodiles in captivity not to eat the cane toads by feeding them small portions so they only get sick and thereby realise they shouldn’t do it again.

This has actually worked. Today if you see cane toads you are actually obliged by law to collect them for the authorities so they can be destroyed. This is done by freezing them down.

History: The Legend of Jandamarra

A fascinating legend is linked to Windjana Gorge which is about Jandamarra. He was a member of the Bunuba tribe and led one of the few organised armed uprisings against European settlements. From the age of 11, Jandamarra was an unpaid worker for the European settlers. One of his close friends was the Englishman Richardson who went to work for the police in the 1890s and Jandamarra joined him as his native tracker.

Unusual for the times Jandamarra was treated as an equal and they were regarded as an outstanding team. At one stage he was ordered to track down his own people and his uncle Chief Ellemarra forced him to decide on where his loyalty lied. Therefore he had to kill Richardson or be an outcast from his tribe. Jandamarra killed Richardson and became an armed fugitive.

On 11 November 1894 Jandamarra and his posse killed five white men driving cattle with guns and ammunition was captured. This was the first time guns were used against European settlers in an organised attack. Two weeks after the death of Richardson in late 1894 the police faced Jandamarra and his men at Windjana Gorge. After eight hours of deadlock, Ellemarra was killed and Jandamarra was wounded but escaped.

For three years Jandamarra led a guerrilla war against the police and European settlers. His hit and run tactics and his ability to vanish became legendary and he was thought to be immortal by the Aboriginal people. One incident was when the police followed him to Tunnel Creek where he disappeared mysteriously.

It was later discovered that there was a collapsed section at the Creek from which he could have escaped. The police later hired an Aboriginal tracker called Micki who was also said to have magical powers. He tracked Jandamarra down at Tunnel Creek and killed him on 1 April 1897.