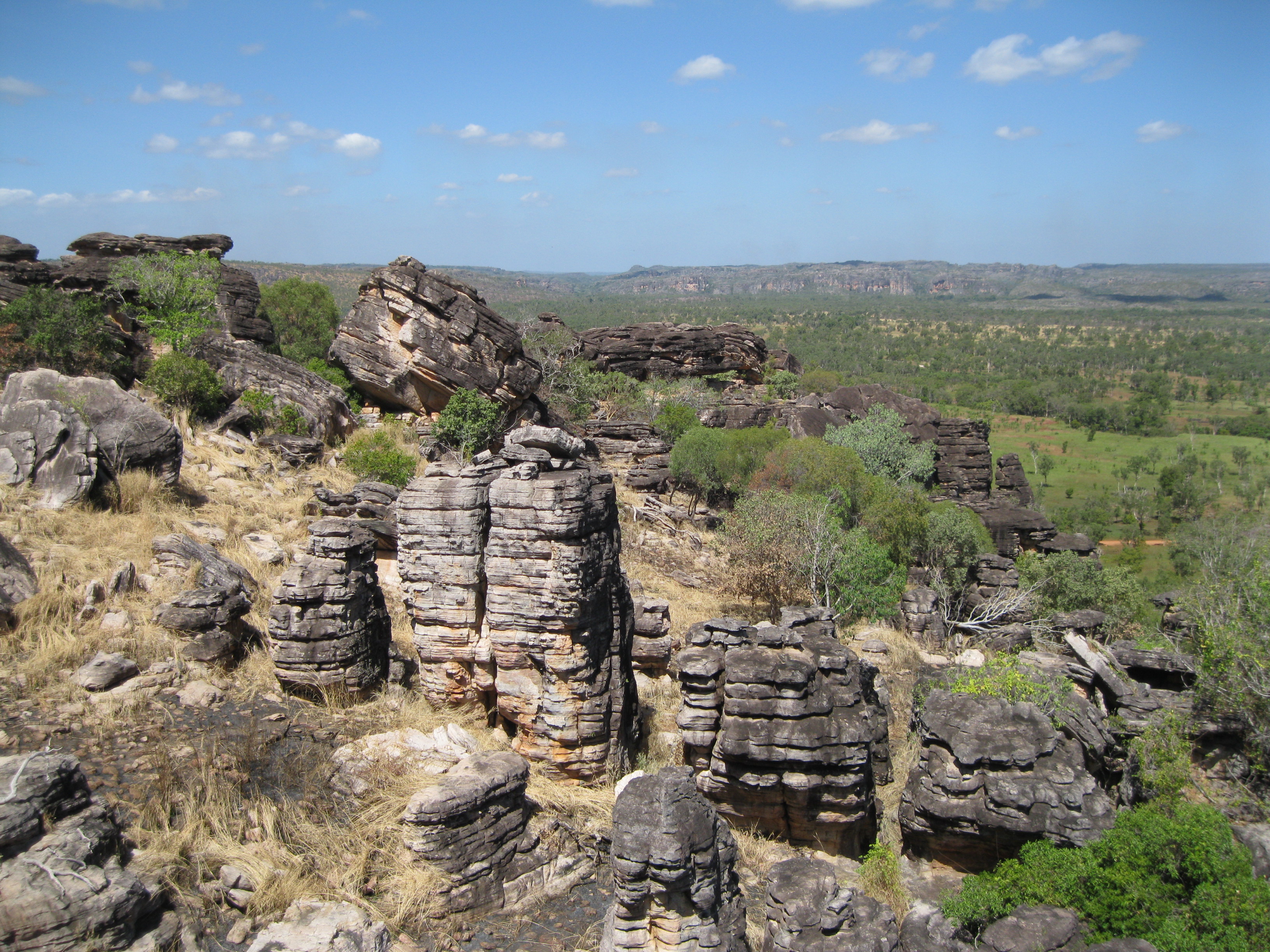 Arnhem Land is Aboriginal land located next to Kakadu National Park in Northern Territory. It is roughly the same size as Portugal and is the home of the oldest living culture in the world. The region is named after the ship Arnhem of the Dutch East India Company which sailed into the Gulf of Carpentaria in 1623. It was declared an Aboriginal reserve in 1931 and is one of the largest of its kind in Australia. It is best known for its rock art, isolation and traditions.

As the region is in a tropical area and due to its location on the coast it has humid and wet summers and dry winters. The escarpment which borders Kakadu National Park consists of sandstone. The region also has a lot of flat landscape and eucalypt forest. The coastal areas have some beautiful sand-dune formations which are predominant at Cape Arnhem Peninsula and the island of Groote Eylandt.

Not many tours go into Arnhem Land as you have to get a special permit to enter both as a tour operator and a private person. Therefore it is a vast unspoiled region. If you go as a private person you have to go from A to B and you are not allowed to stop on the way. Going there to do some bushwhacking is strictly prohibited.

One of the places you can visit via a tour operator is Injalak Hill in Gunbalanya (also known as Oenpelli). To get to Gunbalanya you have to drive through Kakadu National Park and cross the East Alligator River Crossing (also known as Cahill’s Crossing) which is on the border with Arnhem. During the dry season the river is most likely passable but that won’t necessarily be the case during the wet season. When arriving at Gunbalanya you will get a chance to visit Injalak Arts & Crafts which is a gallery where you will see how Aboriginal artists create their art work. It will be explained to you by an Aboriginal and the tour guide how the creations are done. An interesting aspect is that the art work of this region does not look anything like all the dotted work you will see in many tourist shops. Even though about 99% of the population in Arnhem Land is Aboriginal most businesses are run by white Australians as it is not naturally a part of the Aboriginal culture to run a commercial business. The population is the Kunwinjku people. If you walk to the rear of the gallery you will have a great view of the wetlands and Injalak Hill which is definitely worth checking out.

A thing you have to be aware of is the big cultural difference in communication by Aboriginals as opposed to white Australians and people from the Western world. Aboriginals tend to be quite timid, do not say much and mumble a bit. Furthermore English is also their second language. They don’t make much eye contact either. Mind you, this is a cultural aspect and it does not mean that they are rude or don’t care. Because of this the tour guide will do a lot of the talking when you are being shown around even though there is an Aboriginal guide present as well. Just be aware that the guide is not being rude but he has an understanding with the Aboriginal guide in that respect. Another cultural aspect you may notice is that up in the Top End of Australia, Aboriginals are referred to as the “black fella” and white Australians as the “white fella”. Both white people and Aboriginals use these terms and they are not derogatory in any way. Also a thing that some people don’t realise before visiting a community like Gunbalanya is that they do actually live a modern day life with schools, council offices, housing, cars, accessories and so on. They don’t live in the bush as tribal people do.

After the visit to the art gallery the tour goes to Injalak Hill where you will be hiking up the hill to check out ancient Aboriginal rock art and the scenery. This is quite an experience as not many people get to see this. The rock art is in most cases about 20,000 years old, in great condition and pretty awesome. You are allowed to take photos at all spots with the exception of a burial site. You will be led by an Aboriginal guide who explains the history behind the creations and how they were done. In many cases they were painted on with weed. Kangaroo blood and tree milk were the materials used. In some areas there are grooves on the rock surface which is where the kangaroo blood and tree milk were mixed to be used for the rock paintings. Today when the art is created, regular paint is purchased and used.

There are stand-alone paintings and huge galleries. Some of the galleries are located under huge overhangs and are pretty impressive. The motifs are of kangaroos, barramundi, goannas, the spirit man and one of the lightning man which really stands out as it looks different to the other paintings by being pretty simplistic and only created with a white colour. There are also parts of paintings known as “X-rays” as they are works showing the inside of animals. The Aboriginal rock art found on Injalak Hill is some of the finest you will find along with the art work of Ubirr Rock in Kakadu National Park.

The coolest aspect about hiking up the hill is checking out the scenery on the hill itself, the surrounding escarpment of Arnhem Land and the view of Kakadu National Park. Furthermore you will be led through some very cool narrow chasms and will have views of caves where the Aboriginals used to live. There will be plenty of opportunities to take photos of the amazing rock formations. You will also visit the summit of the hill where you will have a perfect view of Gunbalanya and the surrounding scenery of Arnhem Land and Kakadu National Park.

Going to Arnhem Land and visiting Gunbalanya is the real deal, not touristy and you will get to experience a true Aboriginal community. It’s a dry area and the people seem to be doing well at least on the surface. The fuel for the vehicles of Gunbalanya is either opal petrol or diesel, the former is not particularly good for the vehicles but it’s used to avoid the Aboriginals sniffing regular petrol. There will be no supply of unleaded petrol within Gunbalanya and it is illegal to have it in possession. Breach of this can lead to a fine of 11,000 AUD or imprisonment of up to six months. It’s really great to experience an Aboriginal community such as Gunbalanya where things seem to be running well, unlike when you go to some of the major Outback towns such a Kununurra, Darwin, Alice Springs or Broome where the Aboriginals tend to drift or sit around town, they don’t seem to have much purpose in life, have social problems and huge issues with alcohol.

In Outback Australia in certain areas you have the sad sight of burnt cars on the side of the roads. You will also see this in Arnhem Land. But it is also a pretty cool photo opportunity against the bush, escarpments or the sky.

The iconic Australian wind instrument the didgeridoo originates from Arnhem Land and rock art at Ginga Wardelirrhmeng in the northern part of the region suggests that its history dates back 1,500 years. The instrument is made by hardwoods such as different eucalyptus species and they are hollowed out by termites which attack the trees removing the heartwood. The sapwood remains as it contains a chemical which repels the termites. Playing the didgeridoo is great fun. Getting the correct base sound is actually fairly simple and is done by vibrating the lips. The trick is how to do variations such as high pitch sounds and how to continue playing for several minutes non-stop. The technique to do this is by breathing through your nose while you simultaneously use your tongue and cheeks to store air.

There are a few other options going into Arnhem Land. One operator offers a bushwhacking tour which only departs once a year. This is only allowed as the owner of this particular company is well-respected in the Arnhem Land community. This tour will set you back 2,000 AUD a day though. The Aboriginal community of Arnhem Land does not allow many tours into the region. In a way this makes it more “untouched” but as an adventurer wanting to explore the area it is a bit of a shame. It’s fair enough that they want to limit tourists camping in Arnhem Land but it would be awesome if they allowed for day tours going into different areas and the group could camp in the neighbouring Kakadu National Park. Mind you there are some areas where camping is possible such as at Wiligi Outstation.