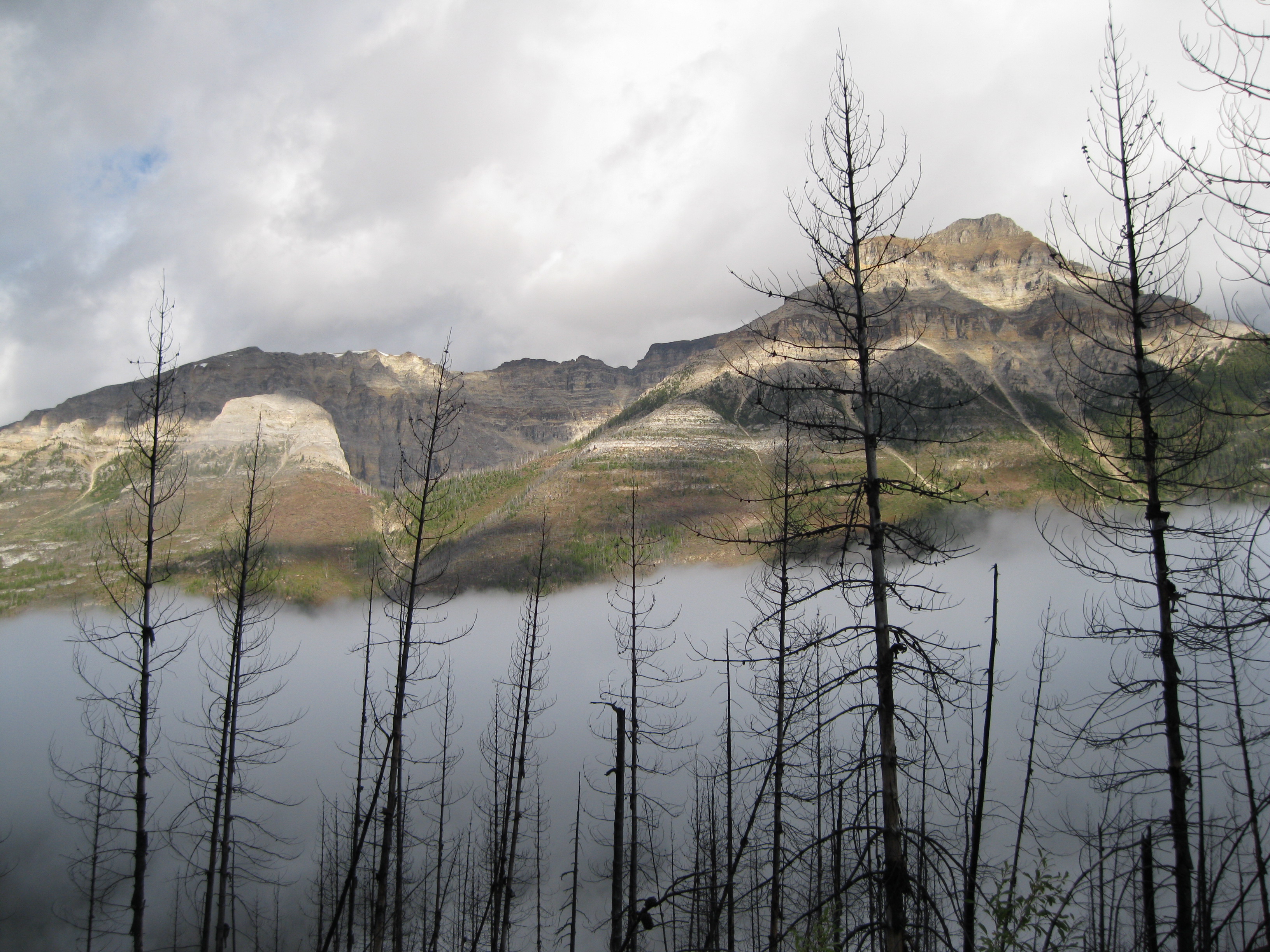 The Park is located in British Columbia right on the border with Alberta. In comparison with Jasper, Yoho and Banff National Parks it’s a bit of an underdog but has some beautiful landscape that can rival these parks.

The park was established in 1920, initially as Kootenay Dominion Park. It was part of an agreement to build a new road across the Canadian Rockies.

Kootenay National Park is based on the eastern side of the Canadian Rockies and opposite on the western side you will find Banff National Park. If you explore both parks you will end having experienced both sides and you will realise the challenges the European explorers faced when they had to cross from the western to the eastern side of the mountain range. Imagine the adventure they headed out on in the day. Fascinating if you think about it.

The park predominantly consists of mountains of faulted sedimentary rock being the mountainous areas and valleys. They contain glacial till deposited in the Pleistocene area going back to 11,700 to nearly 2.5 million years ago. This period spans the world’s most recent period of repeated glaciations.

The park has many examples of Cambrian strata of oceanic sedimentary origin. A stratum is layers of sedimentary rock or soil with content characteristics that distinguish it from other layers. The strata are usually different coloured layers of banded rock typically exposed in cliffs. These Cambrian strata shed light into to a short period in geological history known as the Cambrian explosion that began around 542 million years ago during the Cambrian period. This is where the first major animal phyla appeared, documented in fossils. It would last for the following 20-25 million years.

These multi-layered rocks are really beautiful and it’s so fascinating how these layers have been created over millions of years. Now they are here for us to enjoy the range of colours exposed in the rocks.

History: The Natives, Explorer and Fur-Traders

The Ktunaxa First Nations people were the original inhabitants of the region living in harmony with nature and in relative seclusion. They were hunter and gatherers. Their language was more closely related to the Aztecs in Central America rather than other native dialects in North America. They had a long history of trade with other tribes of interior British Columbia as well as tribes in the south. Nevertheless, they were one of the last tribes in Canada to be reached by the early European explorer in spite of the Ktunaxa being aware of the European presence.

David Thompson was an explorer, surveyor and mapmaker from the North West Fur Company. According to Thompson when coming from the plains, the Rocky Mountains seemed almost impassable even to the eagle. On the western front there were many tribes on the coast and on the Columbia River, which had secured the seclusion of Ktunaxa for many years.

The Hudson Bay Company had established the fur-trading business in 1670 and after having great success for decades on the east coast, around the central lakes and the western plains of Canada, it had come to their knowledge that there was a tribe on the western side of the Rocky Mountains called the Ktunaxa who lived in a land with plenty of wildlife and furs. Word had also reached the Ktunaxa, via the intertribal trade routes, that a “white man” was trading guns and tools with their enemy the Peigan of the Blackfoot Nation on the eastern side of the Rockies

A few months after Thompson had arrived at Rocky Mountain House in 1800 he heard that a group of Ktunaxa were crossing the Rockies to see him. He went out to meet with them, brought them back to the house, traded with them and a relationship between the two had been established. This would change the course of history in the region forever.

Thompson finally crossed the Rockies in 1807, went down the Columbia River valley and established Kootenae House trading post near present day Invermere. This would be the first non-native trade route over the Rockies. In 1808 he explored the Kootenay River and in 1811 he was the first person to chart the entire Columbia River from its source as Columbia Lake to the Pacific Ocean.

The following decades didn’t see much increase in newcomers in the region but with the remarkable accuracy of Thompson’s maps and the expansion, growth and curiosity of the Europeans, new arrivals in the Kootenay and Columbia region would come. Ktunaxa and other First Nations guides were often used on the traditional trails in the area.

In 1841, the fur trader and explorer John Sinclair travelled over the Canadian Rockies via White Man Pass, the Cross, Kootenay and Columbia Rivers to stake claim for England in the disputed Oregon Territory. In 1845, Lieutenants Warre and Vavasour would travel the same route as Sinclair on a secret undercover mission to scout for British troop routes into the Oregon Territory.

As more people travelled across the Rockies, thoughts began to arise about constructing a railway through the mountains. In 1958 Captain John Palliser led an expedition though the Canadian Rockies to investigate the possibility of establishing road and railway routes through the region to the Pacific. The transcontinental railroad was completed in 1885 and was an important milestone in Canadian history.

Most people coming to the Kootenay and Columbia regions either were travelling through or were fur traders. This would change drastically in 1864 when the Kootenay Gold Rush began. This transformed the region fast and settlers arrived especially from the United States and staked their claim.

In 1880 John McKay staked his homestead along the Columbia River near present day Radium Hot Springs and in 1890, Roland Stuart would buy land around the springs to invest in this venture. The first road was built around the site in 1911 as Charles Crook claimed his homestead in nearby Kootenay Valley. Development expanded and when it was discovered that this was indeed hot springs, the first bathing pool and bathhouse were constructed in 1914.

Fire and ice has been a dominant force in creating the landscape around the Stanley Glacier. There has been a history of several massive forest fires through the park. Back in 1968 the Vermilion Pass Burn which went through more than 25 square km (9.65 square miles) of forest is still obvious to this day. In 2003, lightning sparked a fire raging through 170 square km (65.64 square miles), which would become one of the biggest wildfires in the Canadian Rockies.

There were several other fires in British Columbia and Alberta. Hundreds of homes were lost and thousands of people in Western Canada were evacuated. At one point the fire was spreading through the Vermilion Valley into Bow Valley and it was only 50 km (31.25 miles) from the town of Banff. The fire fighters really stepped up to the plate and basically saved the Bow Valley in general and especially Lake Louise and Banff by setting a common strategy in wildfire control. Having said all that, the fire in 2003 was actually also good for the ecosystem in Kootenay National Park

The total cost of these fires in 2003 was 1 billion CAD and it led to an environmental change and a development of a national wildland fire strategy in 2005.

But what does Kootenay National Park have to offer and what makes it so amazing? Well, the Canadian Rockies stretching itself through British Columbia and Alberta is simply some of the most stunning scenery you find on Earth. What actually makes an area like this stand out and makes it even greater to visit is the remoteness and that it in comparison with other areas in the world is less crowded. You have less people and less infrastructure such as roads but also no houses or structures to interrupt the landscape and become a thorn in the eye.

In Kootenay National Park you will experience the feel of untouched nature and dramatic change in the weather. It may be sunshine in the morning when you go on your hike but once you’re on the trail a thunderstorm may turn up or vice versa. Therefore, when you go on a hike be prepared for all elements. Not only should you bring sufficient clothing suitable in rain or shine but you are also in bear country so you have to be bear aware. With regard to the latter, make sure you make some noise when walking through the bushes and bring bear spray. However, don’t worry too much about it, just be aware.

With regard to clothing, wear waterproof hiking boots, bring a rain jacket and rain pants and warm clothes such as a jumper and a beanie.

There are several ways of touring the area. You can join an organised tour leaving from Vancouver covering the highlights of the Canadian Rockies. You could also fly into Calgary, stay there for a bit, then go to Canmore and join a tour. Or you could go by yourself and spend as much time as you want in the areas of interest for you.

There is a lot you can do while you’re in Kootenay National Park and there are many interesting trails. A really cool one is the Stanley Glacier Trail. This is the Canadian Rockies at its best. You will pass a creek on the way through bushes of pine, fir and spruce trees and further up a slope of loose rocks and boulders surrounded by magnificent towering rock walls on each side. So beautiful, and if the weather starts playing up and it gets a bit rough, it will be really awesome to be out and about in the wilderness and experience the tough side of the Canadian Rockies.

The trail can be accessed from the car park just where the trail starts. The trail is 5.5 km (3.4 miles) with an elevation gain of 395 metres (1,296 ft). The hike is a little be strenuous. Not too much in the beginning but as soon as you get to the part where you enter the boulder area you have to be a bit careful as it can get slippery.

The trail goes slowly uphill for the first 2 km (1.25 miles) until you get to the valley where it will be fairly level across Stanley Creek. Here the view of the massive rock walls will come more into view. Further up you will reach the boulder field, and this is where it starts to get challenging. Here you may be lucky to see some ground squirrels and marmots. Going up a bit further you will get to a plateau where you will get an excellent view of a waterfall and Stanley Glacier.

Other main attractions in the park are the Radium Hot Springs, Olive Lake, Marbe Canyon, Sinclair Canyon and the Paint Pots. The paint pots are pools of iron-rich cold mineral springs that bubble up and stain the ground around it in a dark orange colour. These pots were the source of ochre paint used by the First Nations People in the 19th century. Ochre is a natural earth pigment containing hydrated iron oxide.

A great way to see the backcountry is by doing the Rockwall Trail hike where you will see some stunning scenery like Floe Lake.