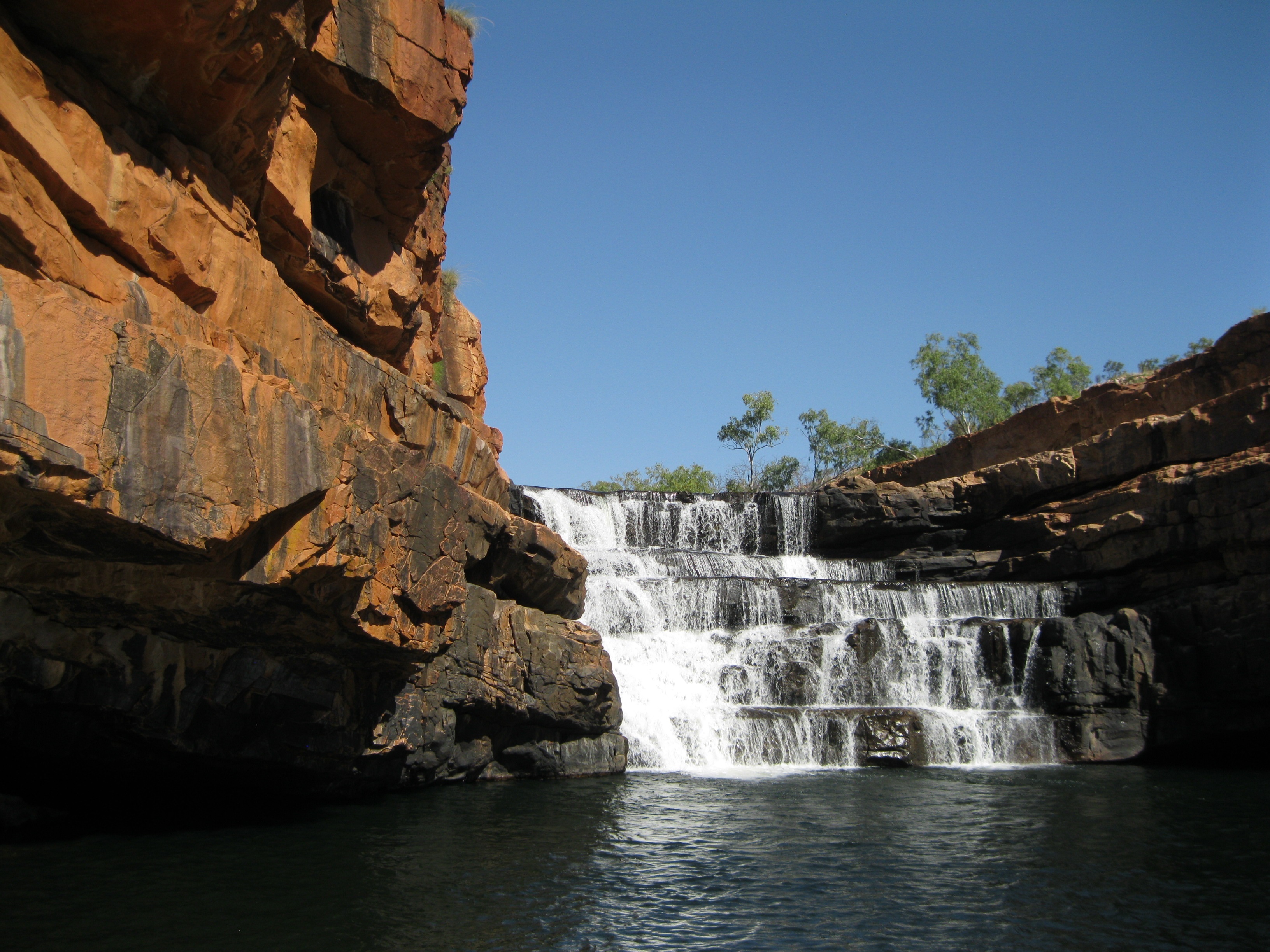 The King Leopold Ranges Conservation Park offers a stunning scenery of creeks, gorges and waterfalls that will blow you away with its natural beauty

The Park is located in the amazing Kimberley region of Northern Western Australia and is known for the attractions Bell Gorge and Lennard Gorge. Furthermore you will find the Silent Grove Campground and Mount Hart Homestead. The latter is a former cattle station and is privately operated.

The King Leopold Ranges are the watershed of the Lennart River, flowing to the south-west, and for Bell Creek that flows into the Isdell River and then further down to the Walcott Inlet to the north-west. The area surrounding Bell Gorge has River Red Gum and Leichhardt trees. You may also see Freshwater Mangrove, the White Dragon tree, or the Ironweed tree which corky bark crack and favour the moister soil close to the creek, or you may spot the occasional Boab tree. The Ranges were named by Alexander Forrest during his exploration of the region. He named it after the Belgian King Leopold II as an appreciation of his interest in the expedition.

To get to Bell Gorge and the other attractions of the park You have to go via the Gibb River Road. It’s the main road going from Derby all the way through the Kimberleys to Cambridge Gulf at Wyndham. It’s a distance of about 660 km (410 miles). Driving on the Gibb River Road is such a cool Outback experience as it’s an unsealed road for the most part.

You will see a lot of beautiful scenery on the way and you will be crossing several rivers and creeks in your vehicle which is cool as it so breathtaking. Some of the floodway are paved. It is therefore recommended that you travel in a high clearance robust vehicle or a 4WD when travelling on the Gibb River Road. If you want know more on the history of the Gibb River Road, please check out article on Mount Barnett Station.

Geology and the Formation of the amazing King Leopold Ranges

The King Leopold Ranges consist of a long rugged ridge and escarpments covered up with spinifex. Mount Ord is the highest peak and reaches 937 metres (3,074 ft) above sea level. The slopes are very steep in the valley and are covered by thin soil and have a sparse vegetation. The cliffs are bare and in some areas you will find the stunning steep-sided gorges which can be cut up to 300 metres (984 ft) deep into the range. In some places the ridges stand about 600 metres (1,969 ft) above the valley.

About 560 million years ago the sedimentary layers of the widespread Kimberley and Speewah Basins were pushed over the Hooper Complex creating a massive mountain chain. The rugged scenery is a result of erosion where folded and faulted sandstone layers are featured. The landscape have steep ridges of resistant white and pink quartzite and the valleys between the ridges are created due to erosion of less resistant brown mudstone and siltstone layers.

The Kimberley and Speewah Basins consist of a thick sequence of layered sedimentary rocks made up by mostly white, pink and purple-brown quartz sandstone. There are also thick layers of siltstone, mudstone and basalt that have been hardened from lava flows. Furthermore, there is also dolerite, which is lava that intruded into older sedimentary rocks.

The Hooper Complex is based south-west of the Kimberley and Speewah Basins. It is an older area of smooth pink granite, jagged, grey volcanic rocks and red-brown sedimentary rocks which have undergone a change in form.

The ridges of the King Leopold Range consist of white and light brown cross-bedded sandstone and pebble and cobble conglomerate deposited in the Kimberley Basin. Outcrops in the valley are composed by less resistant mudstone, siltstone, shale, dolomite and basalt with sills of dark grey dolerite that were formed by the injection of molten rocks between layers of sedimentary rock.

The King Leopold Range is the ancient coastline bordering the Canning Basin and the fringing Devonian Reef which was formed 360 years ago beneath the Devonian Sea.

There are some areas where you will find gaps in geology of 15 to 20 million years which are known as unconformities. This can be seen in places like Inglis Gap where the Gibb River Road enters the King Leopold Ranges. Here sandstone and pebble conglomerate can be seen in the walls overlying by granite.

Also south-east of Mount Bell a 50 metre (164 ft) tall cliff of tightly folded beds of sandstone is exposed where the road makes a drastic turn. Folding and faulting are also exposed at in the rock walls at Lennard Gorge. These structures were formed about 560 million years ago when the Kimberley Basin crumpled at the edges and was pushed to the south-west over underlying granite.

Exploration of the King Leopold Ranges

A notable explorer of the Australian Outback was Alexander Forrest who was contracted by the Survey Department. He did a lot of the exploring with his brother John Forrest who later became the first Premier of Western Australia. In 1879 Alexander Forrest led a survey party through the King Leopold Ranges accompanied with his brother Matthew and six other men. It resulted in the discovery and naming of the Kimberley district, the Margaret and Ord River and the King Leopold Ranges. They also found areas of well-waters pastoral country on the Fitzroy and Ord Rivers.

They were struggling and a lot of time was used on unsuccessful attempts in finding their way through the King Leopold Ranges. Still, Alexander Forrest would express his views on what he thought was an area of good grass and water and that it was also a promising prospect for gold and agriculture. Furthermore the Aborignals showed no hostility. The area later attracted a lot of squatters and investors.

About 113 km (70.6 miles) from Derby on the Gibb River Road you will be approached by a rock known as the Queen Victoria’s Head, which is a granite outcrop. This is one of the cool sights to check out in the park as it really stands out in the landscape. At Queen Victoria’s Head it will be a perfect opportunity to take a photo of the road and the rock as well as the backdrop. During your drive on the Gibb River Road it is recommended that you make a couple of stops along the way to take some photos of the scenery and just of the road. The area is so remote, the road is really cool and just goes on forever.

Further up the Gibb River Road you will get to a point where there is a lookout area. Here you will have a magnificent view of the King Leopold range, which is awesome as you will see the range as far as the eye reaches.

Going to Bells Gorge is one of the highlights of the park. Doing the Bell Gorge Trail is highly recommended and it will take you down to Bell Gorge where you will be met by a stunning little gorge, a waterfall and a plunge pool where you can take a dip. It is so beautiful and cool. It’s a 2 km (1.25 miles) return walk and you should probably allow at least two hours to go on the excursion as you want to take your time to take in the scenery and when you get to the gorge you definitely either want to take a dip or chill out or possibly both.

The walk is not too strenuous and is on a pretty even surface. At one point you have to cross the creek, which is easy, and following that you have to cross another creek that is a tad more challenging but not too bad. Just be careful and mind your step as it can be a bit slippery.

Once you have crossed the big creek you are on a fairly even rocky surface and you can continue along the creek a bit uphill. Remember to look back at where you came from, take in the gorgeous scenery and take some shots. The further you walk uphill the closer you will get to the waterfall and the gorge itself. You will get to a point where you can look down on the waterfall and the gorge. Note the stunning steep vertical cross-bedded rock walls. What an amazing scenery and a sight for sore eyes as it is just out of this world.

Continue a bit further uphill and you will get to the section where you have to walk down to get to the gorge itself. It does get a bit steep downhill and when you get down towards the gorge and plunge pool you just have to be a bit careful at that point, as it will very rocky section. Still it’s not too challenging as there are some natural steps in the rocks you can use.

The gorge is surrounded by steep U-shaped rock walls which is so amazing. Right at the spot where you may leave your belongings to make yourself ready for a swim, you will have a huge rock cliff to your left, the stunning waterfall of five steps in the middle and a steep vertical rock wall to the right.

When you take a dip into the pool, please mind the slippery rocks around the edges of the pool when you get into or out of the water. Take your time swim towards the rock walls and close to the fall as well. It is so cool and stunning.

You also have the option of doing a hike on the opposite side where it will take you straight down to the waterfall where you will be able to get a better look at the fall itself. This hike will take you through a bit of bushy terrain where you will also see the rock wall up close. There will be a spot there just at the edge of the waterfall where you can sit down, have a chill and sunbake a bit.

On your way back when you get to the big creek crossing, go to a secure spot. Here you will be able take some great photos of the mouth of the waterfall at the other end. You can’t actually see the fall but at this point but will know where it is having already been there.

Please bear in mind that it can get really hot in the gorge, sometimes beyond 40 degrees Celsius (104 degrees Fahrenheit). Therefore it is recommended that you go during the cooler times of the day. Furthermore bring plenty of water to avoid dehydration, sunscreen and a hat so you don’t get a sunburn. It is also advisable that you use decent foot wear such as hiking boots.