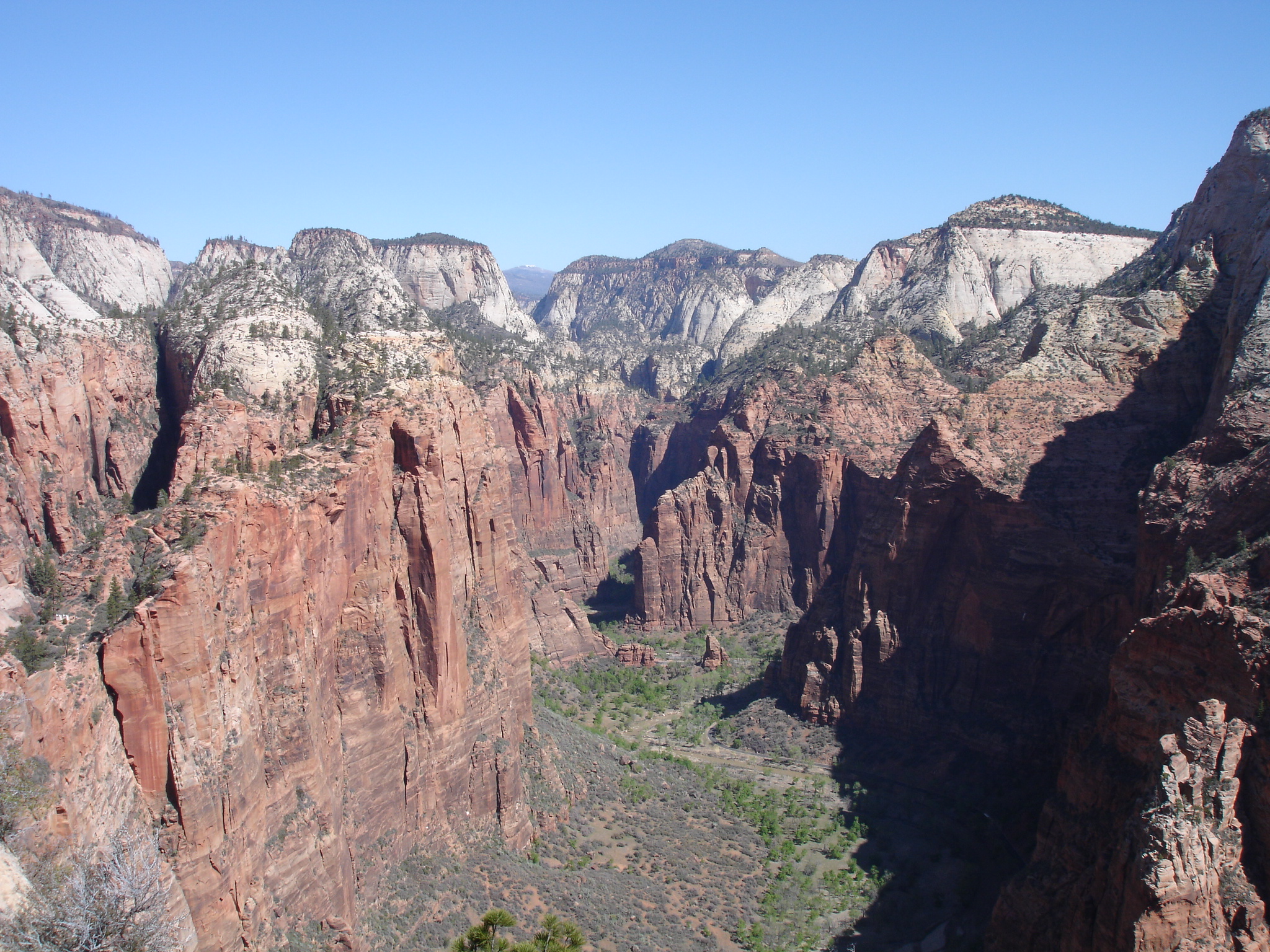 Zion National Park is the first national park in the state of Utah and was created in 1919. Initially in 1909 it was designated as a national monument by President William Taft under the name of Mukuntuweap National Monument. It was basically inaccessible though due to poor road conditions. The Utah State Road Commission began constructing a state highway system which improved the access to the southern region. State officials also negotiated with the Union Pacific Railroad to develop rail and automobile links and tourist facilities in Southern Utah. By the summer of 1917 cars were able to reach the first visitor lodging which was a tent camping resort called Wylie Camp. In 1919 a congressional bill was signed which designated it as Zion National Park.

The park is known for its towering canyon walls and stunning scenery. The most spectacular feature of the park is the 24 km (15 miles) long Zion Canyon which is up to 800 metres (2625 ft) deep, cut through Navajo Sandstone. Zion National Park is located at the junction of the Colorado Plateau, the Great Basin and the Mojave Desert near Springdale in south western Utah.

There is very diverse plant and animal life which is due to the distinct geography of the park. It contains desert, woodland, forest and riparian areas which is where land and river streams meet. There are 900 plant species only found here. You will see a lot of cottonwood trees and rabbitbrush shrub. The latter blooms in late summer and adds a lot of colour to the park with its yellow flowers. There’s a pretty compact growth of rabbitbrush along the Pa’rus Trail in some areas and serves as food for some of the wildlife. It is also a source of nectar and pollen for bees, wasps and butterflies. In recent years it has been explored whether the plant could be used for medicine or alternative energy. The animal life includes 208 species of birds, 69 mammals, 29 reptiles, 6 amphibians and 9 fish as per the National Park Service. Just remember, do not feed the wildlife such as the squirrels as they can easily bite your fingers off. There is also a 100 USD fine for feeding the wildlife.

Furthermore Zion National park offers you canyons, gorges, buttes, mesas, monoliths, rivers, slot canyons, geologic gashes, pinnacles, eroded rocky layers and natural arches in many different colours. So there are a lot of good reasons to visit this stunning national park. Unlike Grand Canyon where you look down from the rim, Zion National Park is mostly viewed from the bottom. Actually quite an interesting difference between the two when you think about it. The landscape has been shaped by erosion and tectonic forces through millions of years.

The park has a great shuttle bus transportation system which will take you to different highlights and landmarks where you can get off and go on individual hikes. It’s in operation from 15 March to 25 October, the weekends in November and is a wonderful scenic ride. The shuttle is free and runs frequently during the day, as often as every seven minutes but the average wait for a bus is 15 minutes, sometimes less. This is from early morning to late in the evening during the busy season. There are two lines which are the Zion Canyon Shuttle and the Springdale Shuttle. The former has nine stops within the park and the latter has nine stops in Springdale. The transfer between loops takes place at the Zion Canyon Visitors Center. It is the only form of transportation during the peak season as private cars are not permitted.

The park was given the name Zion by the Mormon pioneers in the 1860s as it gave them peace, thus the word zion which is Hebrew for “place of relaxation and peace”. A lot of the formations have been named with biblical references, one being a highlight, the Three Patriarchs, which is a trio of similar shaped cliffs. You can see them on the way with the shuttle bus and if you get off at one of the first stops there is a path leading up to a viewpoint of the rocks. They’re named after Abraham (2,131 metres/6,990 ft tall), Isaac (2,080 metres/6,825 ft tall) and Jacob (2,082 metres/6,831 ft tall) from the bible.

Walking along the Virgin River you will be met with some picturesque views of the surrounding rocks such as the aforementioned Three Patriarchs and the river as well. Having a stroll here is a really good option if you just want to have a relaxing hike and take in the landscape. It’s such a delight and is highly recommended. Furthermore you will also be able to view one of the most famous rock formations which is the Watchman. It is particularly beautiful when viewed from the Virgin River. It’s a great photo opportunity with the Virgin River and the cottonwood trees in the foreground and the Watchman in the background. There is a trail called the Watchman Trail, but you can also get a really good view of this particular rock formation from the Pa’rus Trail which is paved.

Another highlight is going to Weeping Rock. There’s a short trail leading there which is moderately steep. It’s pretty popular due to its beauty. On the way you will see one of the landmarks which is Cable Mountain among other great formations. When you get to the top and end of the trail you will find a really impressive vantage point, also referred to as the Weeping Rock alcove. This was carved out by erosion. The name comes from the continuous water dripping down from the rock at the alcove which has created a lush hanging garden. Mind the steps leading up here as it can be slippery due to the dripping water and the moss on the rocks. From the alcove viewpoint you will have an amazing view of the canyon with the Great White Throne to the left and Lady Mountain and Angels Landing to the right.

Cable Mountain is not just a noteworthy peak, it also has a quite interesting history. You may be able to see a small box on the top of the mountain when viewed from the canyon. This is a cable works ruin which was constructed in 1901 to transport timber from the plateau to the canyon below. The operation was shut down in 1930. The Great White Thorne is an impressive white topped monolith which is one of the most famous peaks of the park with an elevation of 2056 metres (6744 ft). There is a shuttle stop at a viewpoint of the rock and the nearby Organ. The Great White Throne often appeared on historic images such as a Zion National Park poster from 1938. It was named by Methodist minister Frederick Fisher as he reckoned it was magnificent enough to resemble the throne of God. He also named Angels Landing and the Three Patriarchs.

Another cool little trail you could do is the Riverside Walk which is the gateway to the Narrows. The trail starts at the Temple of Sinawava, which is the final shuttle stop deep in Zion Canyon, and is a 3.2 km (2 miles) roundtrip. The hike is easy as it’s paved, pretty level and will give you some nice views of the Virgin River, the rock formations, hanging gardens and waterfalls. It’s also a great place to spot wildlife such as squirrels which there will be plenty of. Again, do not feed them. The trail ends where there is no dry land on either side of the river and the canyon turns really narrow. This is where the Zion Narrows start.

To get a spectacular view of Zion Canyon you should climb to the top of Angels Landing. This is definitely one of the highlights of Zion National Park. Angels Landing itself is a 454 metre (1,488 ft) tall rock formation. The peak is at 1,763 metres (5,785 ft). There’s a trail leading all the way up to the top which was cut out in rock in 1926. The trail is 3.9 km (2.4 miles) long and begins where the shuttle service stops at the Grotto drop off. It follows the path of the Virgin River and as it slowly gets steeper it will take you to the paved part of the trail which is a series of hairpin turns leading to a shorter and steeper series of hairpin turns called Walter’s Wiggles.

Don’t forget to check out the view of the canyon on the way as it will be amazing. Walter’s Wiggles will be the last part of challenging part before you get to Scout Lookout. Here you will have an awesome view of Angels Landing with the canyon in the background. This is also the point where you should turn around if you don’t want to go to the top of Angels Landing. Mind you, if you are not the adventurous type and are afraid of heights you better turn around here. Continuing on further for the last 800 metres (half a mile) to the top is a bit strenuous, it will be a steep and narrow trail, a bit rugged and uneven with sharp downward slopes but you will be able to hang on to cable chains on the way. Don’t climb Angels Landing in really bad weather such as heavy rain or during a thunderstorm. Don’t bring small children and if you bring older children they should be closely supervised. If you are not afraid of heights, are careful and are obviously wearing appropriate footwear, you will be fine. In this case you should definitely go ahead and do it as it is an awesome experience. The view from the top is stunning! Stay at the top for a while, have a good look around and take in the view. There should be plenty of space for you up there. You will have a 360 degree view of the canyon and notice the different lines in the rocks which represent the water level at different geological times. If you leave early in the morning you should be there at around lunch time, so it will be a perfect spot for a break and lunch. When you are ready to go down it has to be done on the same route you came up. Again, be careful from the summit of Angels Landing down to Scout Lookout.