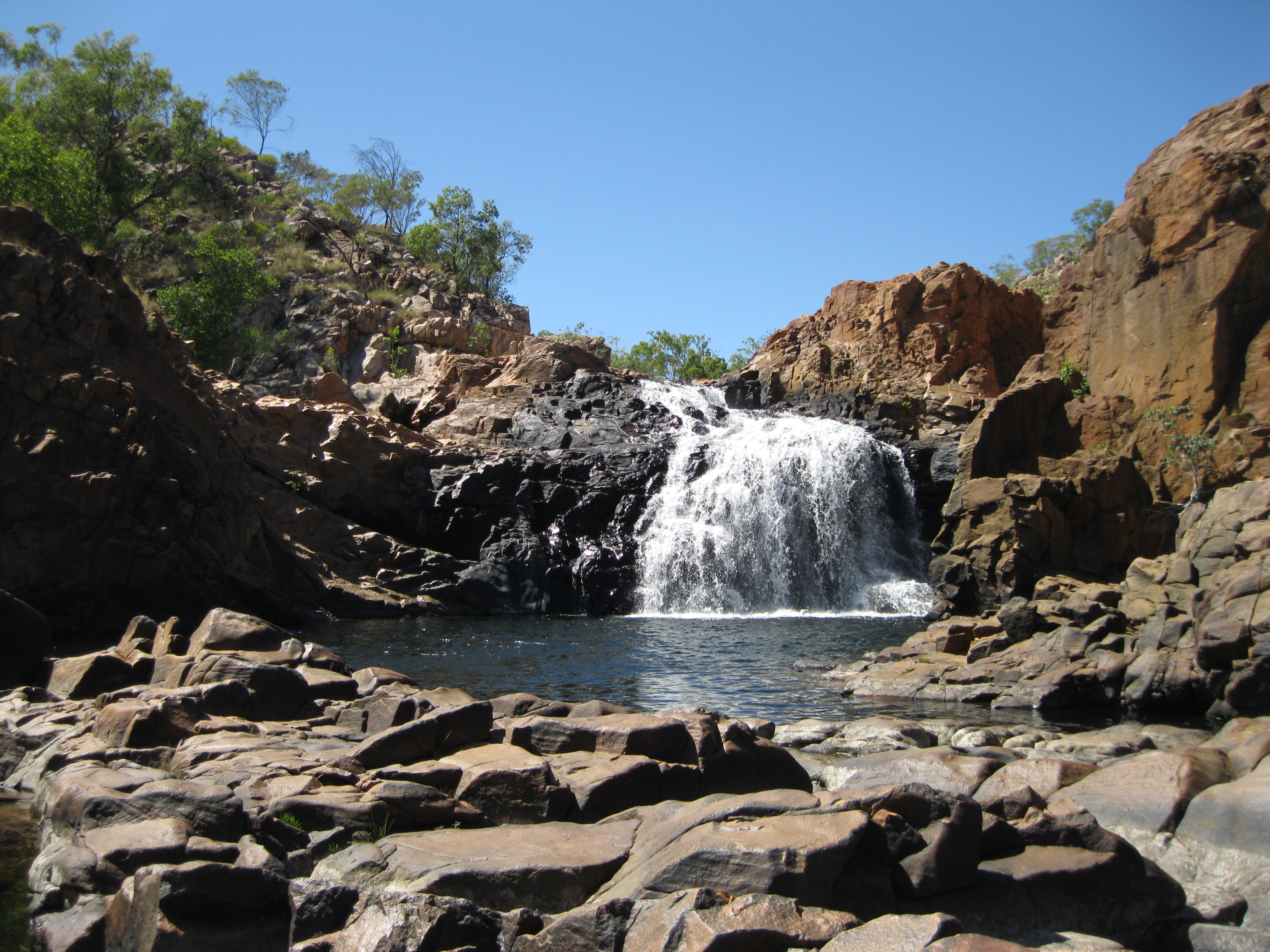 Nitmiluk National Park is located in the Top End of the Northern Territory of Australia just below Kakadu National Park which it borders with. This beautiful park is a diverse sandstone country which consists of a series of gorges on the Katherine River and another major site called Edith Falls. Furthermore the park features rainforest, gullies and a massive valley. Nitmiluk means “place of cicada dreaming” in the local Aboriginal language Jawoyn.

The main entrance of the park is located 30 km (18.6 miles) northeast of the town of Katherine which is accessed by a sealed road. The road is closed during wet season due to flooding. The best time to go it between May and September which is during the dry season.

The centre piece of the park is Katherine Gorge. It was carved out by Katherine River, a tributary of the Daly River. The gorge is made up by thirteen gorges which consist of rapids and falls. There are four watercourse in the park which are the Katherine River, Edith River, Fergusson River and King River which all begin on the Arnhem Land plateau and drain into the Daly River. The rugged terrain of the Arnhem Land plateau drain fast which makes the creeks and rivers rise and fall fast during times of rain.

The geological history of Nitmiluk National park is long and complex. The formation of Katherine Gorge is just a very small park of it. Kombolgie Sandstone is the base of the park. It was laid down where there was a big river delta 1,650 million years ago. Sand and rock tumbled down the river, the heavy rocks fell to the bottom while the lighter rock were carried further down. Over the years, layers of sediments of rocks, pebbles, sand and silt accumulated and old layers were compressed under new layers to form into hard sandstone and conglomerate which is the Kombolgie Formation.

Katherine Gorge started forming 120 million years ago. The rivers started carving its way from the sandstone about 1 to 25 million years ago. Watercourses followed joints and faults and weathering eroded stretches of straight gorges at angles to each other. It is believe that Katherine River established its present course through the gorge during the last 20 million years.

The horizontal bands which can be seen on the rocks are due to the way sediments were deposited over the years layer by layer. The river eroded away the weak areas around bands making the bands clearer, but the horizontal bands are not due to erosion but a result of how they were laid down.

There are four major landforms in Nitmiluk National Park. The Armhem Land plateau which consists of of the rocky hills and rugged plateaus and includes Katherine Gorge. The uplands which are the ridges, hills, small tablelands, mesas and isolated rounded hills separated by small valleys in the southwest of the park. The mixed hills, based in the Seventeen Mile Valley which consist of hills and plains on volcanic rock and granite. The last landform are the elevated laterite residuals also a part of the Seventeen Mile Valley and holds flat-topped tablelands with steep slopes.

There are many different options of things to do in the park. You can go canoeing or on a cruise down Katherine Gorge which is amazing. Going hiking on the Jatbula Trail is another possibility or you can take a stroll down to Edith Falls which is a very cool option.

Taking the cruise on Katherine River down Katherine Gorge is highly recommended. You will have some spectacular views of the gorge and the steep rock walls surrounding it. You may also be able to view some wildlife such as flying foxes. There are thirteen gorges but the cruise will only take you as far as the fifth gorge. The tours depart from the Nitmiluk Tours Jetty.

The walls of the second gorge are a lot steeper and taller than the first gorge where it’s wider and not so steep. The further upstream you go, the narrower the gorge gets. When you are deep inside the gorge the rock walls are tall and provide a fair bit of shade. If you are canoeing it will be easier for you to get deeper into the gorge and then deeper you get you will find that it is less visited and you will have it more for yourself. The inner section of the gorge is separated by bit rock bars and the tour boats will have to turn around at this point. This also goes for the people in canoes.

The conditions of the sandstone in the gorge are harsh with coarse sand, leaf litter and very little soil for the plants. Water is always insufficient and it is extremely hot. During the wet season the drainage is quick so moisture is only available for a short period of time. The plants on the sandstone plateau have adapted to the dryness. Some have very small leaves to minimise the loss of water and other drop their leaves during dry season to conserve water.

Normally tall trees don’t grow on the sandstone where the soil is shallow but some medium trees do appear where the soil is deep enough such as the Scarlet Gum and the Variable-barked Bloodwood. The animals in this areas are rarely active during the day due to the harsh climate so they shelter themselves in the rocky cracks or hollow trees.

A good spot to get a view of Katherine Gorge is at Baruwei Lookout. There is a car park just below the lookout spot where you can either walk down to the Visitor Centre to have a look around. You can also walk down to the departure point of the cruises and where you can hire canoes or you can walk up to Baruwei Lookout via the Baruwei Walk. There’s a short option which is a walk up a little trail and a flight of stairs towards the end. It’s a bit steep but it not too difficult. This obviously depends on how fit you are but if you have issues with your legs and it proves to be a challenge there are hand rails to assist you in the difficult areas. This hike is about 1 km (0.6 miles).

At the Baruwei Lookout you will have a look at the first gorge, distant ranges and the Seventeen Mile Valley. Bear in mind that when you walk on the escarpment the tempareture can be up to 10 degrees Celsius (50 degrees Fahrenheit) hotter than at the river. If you want further information on the walk you can pay the Nitmiluk Centre as visit which is the visitors centre. Animals you may see could be the Antilope Wallaroo or the Leichhardt’s Grasshopper.

You can also do the long option which continues over rocky terrain which is fairly easy. Here you will have different views of the Seventeen Mile Valley and see some of the unique plants of the escarpment country. The return passes through the park administration building, the campground and at the end you will reach the Visitors Centre. While you are doing the long option of the Baruwei Walk you do also have the option of continuing on the Southern Walks trail which is a series of seven trails running parallel to the gorge.

Mind you don’t go near the edge of the water of Katherine River or enter it for a swim as there are estuarine crocodiles (saltwater crocodiles) which are very dangerous. Furthermore there are also strong currents which can be of danger too.

A great option is going the Leliyn Loop Walk which leads to the stunning Edith Falls. This area can easily be accessed from the Stuart Highway as it’s located in the western edge of the park. There are several trails you can go on. You can take a short walk of 2 km (1.25 miles) return to the Upper pool or longer walk to the Sweetwater Pool which is a return walk of 8.6 km (5.4 miles).

A really great option is going the Leliyn Trail which is a nice little loop of 2.6 km (1.6 miles). This is a great for experiencing the escarpment country and you will see a series of beautiful pools and waterfalls along the way. This rugged and dry escarpment country above the falls supports a diverse life of plants which have adapted to this dry environment and sandy conditions. The plant life here if more closely related to the flora found in south western Australia than the plants found in the lowland just a few hundred metres away. You will find grevillas, spinifex and other plant species on your walk.

The Leliyn Trail is not too strenuous, it ascends up a hill and will lead up up to a cool spot called Leliyn Lookout which is a great for taking photos. Along the way you will have plenty of opportunities to take fantastic pictures of the pools and rock formations. Thereafter you can take a stroll down to the Upper Pool where you will have a perfect view of the pool and Edith Falls as a backdrop.

At the pool you can have a real nice dip as well which is so cool in these surroundings. Therefore remember to bring your bathers. Take your time here, have a stroll around because you will have some amazing views of the area from all sorts of angle where you will have great photo opportunities. Not only will you have the view of Edith Falls but also if you turn around you will have great views of the pool below, which is known as the Middle Pool, and the valley looking down from the escarpment. Sit down, have snack and a chill or sunbake for a bit before you continue your hike.

After your dip continue further on the loop towards Bemang Lookout. This is a small climb up the other side of the fall and when you get to Bemang Lookout you will find yet another good spot for taking some shots. You will have yet a different view of the Middle Pool, an amazing view of two of the falls of Edith Falls, the escarpment and beyond in the background. This is only 540 metres (0.33 miles) away from the falls and the return to the carpark is 1.6 km (1 mile).

The Sweetwater Pool Walk, which is the long walk, branches off from the Leliyn Trail once you have reached the escarpment. The walk terminates at the Sweetwater Pool where there is a small camping site. To camp here you have to get a permit. Do not walk beyond the Sweetwater Pool as this trail is a 60 km (37.5 miles) one way wilderness trail which can only be commenced at Katherine Gorge.

At the carpark there is a coffee shop where you can have a chill after your hike. Just mind you that they are not too friendly if you ask for a take away coffee. They will add a surcharge as they will give you a song and dance about saving the environment, so you are better off asking for a coffee in a mug and have a sit down and chill out.

There are two permanent campsites in the park both for tents and caravans.