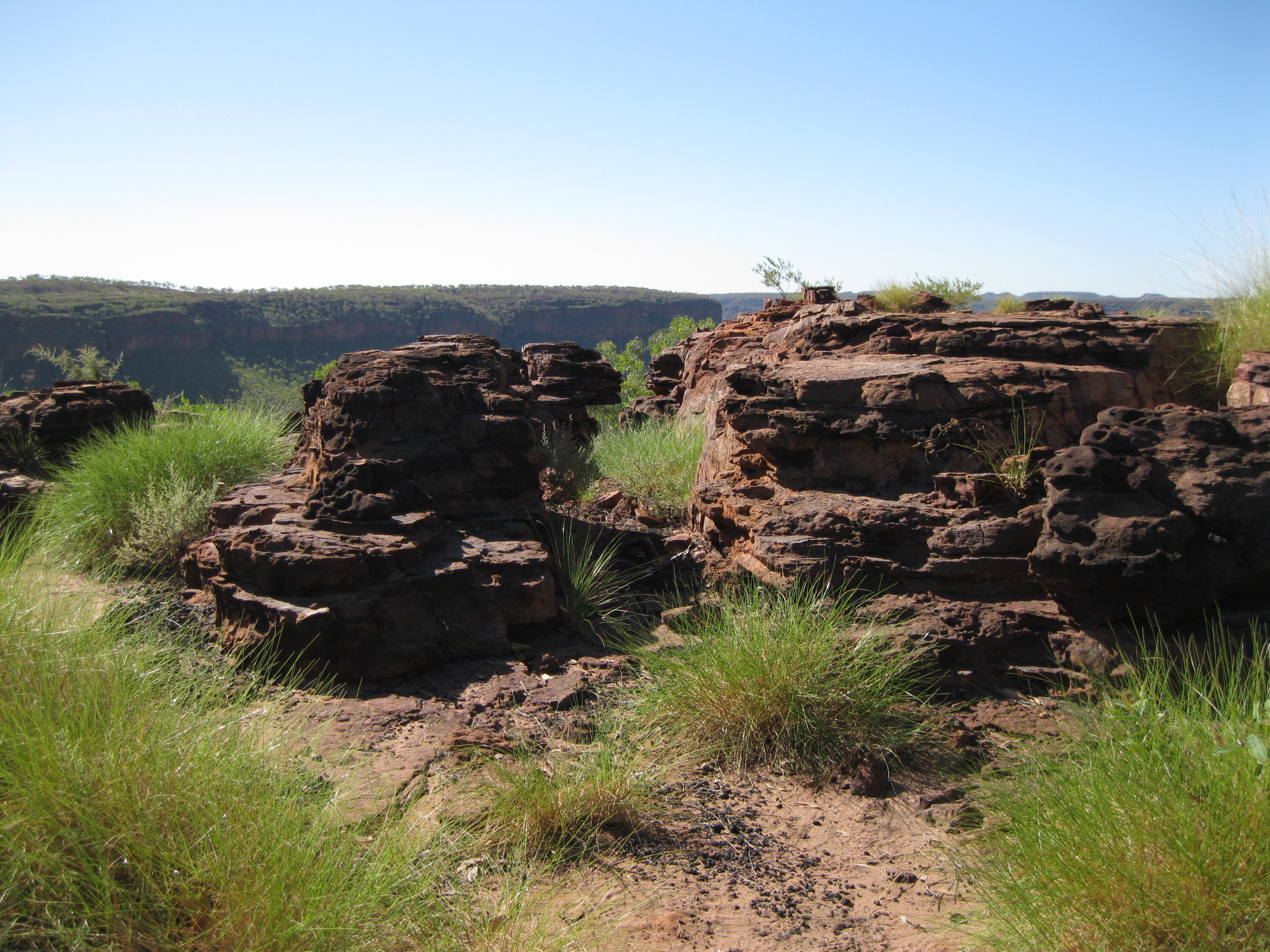 Explore an awesome nature preserve in a beautiful part of the Top End of the Australian Outback. You will be amazed by its beauty

Judbarra/Gregory National Park, also known simply as Gregory National Park, is based in the northern part of Northern Territory. It features beautiful ranges, escarpments, grasslands and gorges that are great to explore. It is also rich in Aboriginal culture and in history about the European settlers.

The park is accessible from the Victoria Highway when coming from either Katherine or Kununurra. You can also enter the park by unsealed roads from the Buntine and Buchanan Highways. As long as the Victoria Highway is open, the hiking trails and campground are available in that part of the park. The highway may be closed during the wet season.

The Victoria River Roadhouse is located at the Victoria Highway not too far from where the Escarpment Walk starts, which is one of the most popular attractions of the park. At the roadhouse you will find facilities and you can buy supplies as well.

Geology, Escarpments and the Valley

The Victoria River region is a dissected plateau, which means that it’s an area that has been severely eroded leaving sharp reliefs. It’s a mesa country of rugged ridges that borders with the south eastern part of the Joseph Bonaparte Gulf. It’s based on the Victoria Basin and during the early Adelaidean period about 1,500 million years ago, a cycle of marine deposition resulted in uplift and erosion that created rocks of sandstone, siltstone and carbonate. During the late Tertiary period further uplift and erosion exposed old rock created a landscape of wide plains with resistant sediment forming the plateaus and mesas.

The ranges mostly consist of sandstone, which are in contrast to the valley below of alluvium, that is loose unconsolidated soil or sediment that has been eroded or reshaped by water and then redeposited on a non-marine environment. The massive fault and lack of vegetation and soil on the hills really makes the rugged scenery stand out in the landscape. The Victoria River mainly flows through the area during the wet season with smaller steams and watercourses.

The area was covered by the sea and during this period layers of sand and salt accumulated and formed sedimentary rocks. This was followed by an uplifting which exposed the sediments to erosion. The water level rose three times, covering the area and laying down sediments. Three times uplifting exposed the sediments to erosion. Uplift and faulting created cracks and lines which made the area weaker. The plants took root in the cracks which made the cracks expand. The roots, wind and water would carve through the sandstone over millions of years.

Creeks were formed along the lines of the weaknesses which would grow into rivers and eventually created the valley we see today. A weathering process left a large concentration of iron and aluminium oxide. The hard red caps of the mesa arose the landscape. These processes continue to this day documented by big rocks that have tumbled down form the top, breaking into smaller pieces and has become a part of the rocky slopes. Smaller rocks fall into the river and are deposited as sediments elsewhere.

The Explorers, the North Australian Expedition and the Cattle Stations

In 1839, the Scottish Captain John Wickham and Welshman John Stokes were exploring the region and named the Victoria River. They came to the region by boat. At the time Stokes was a lieutenant and served under the command of Wickham as a part of a survey of the Australasian waters. Wickham was later unable to continue due to ill health and Stokes would take charge of the ship. Later in his career, Stokes would become an admiral. Following the encouraging reports of Wickham and Stokes, the English-born Australian explorer Augustus Gregory led the North Australian Exploring Expedition in 1855-56 along the Victoria River to its source.

Gregory was commissioned by Royal Geographic Society in London and the purpose was to investigate whether the land had enough natural resources to support future settlements. The group would include Augustus’ brother Henry as second in command and botanist Ferdinand von Müller, all together 19 men with 50 horses and 200 sheep.

They headed out from Moreton Bay just north of Brisbane in Queensland in August 1855 and by mid-September they reached the mouth of the Victoria River. The party would split up, with one group going up the river in their schooner. The other group went over the range which was led by Gregory and both groups would reunite in October 20 km (12.5 miles) west of what is now known as Timber Creek. Gregory would explore the river all the way to the edges of the Tanami Desert. On 2 July 1856, Gregory made an inscription on a boab tree indicating where he left a letter in case the party would get lost. This is now known as the Gregory Tree.

After exploring the region they would head east through the Elsey, Roper and Macarthur River and then venture via the Flinders, Burdekin, Fitzroy and Burnett Rivers before reaching Brisbane on 16 December 1856. They travelled more than 8,000 km (5,000 miles) by land and more than 3,200 km (2,000 miles) by sea.

The expedition was recognised for its excellence in management and for the fact that there were no deaths. It is said that Gregory was not too impressed by the potential but he did assess some areas that were suitable pastoral development. Some say that this was interpreted optimistically by some readers of his material and that it was presented as if he had recommended that the area around the Victoria River should be opened to pastoralists.

In the park you will find evidence of early European settlements such as Bullita Outstation which was operated by the Durack family who were a major influence on exploration of interior Australia and the cattle business in the 1880. The old homestead still stands and the family name is carved in a boab tree nearby.

You can also still find old facilities of old cattle stations in the park such as the Spring Creek Cattle Yards where the yards were used to move large herds of 500 head of cattle. The Drovers Rest Camp near Bullita was used by drovers who needed to transport cattle between stations and markets. The Humbert track, which runs between Bullita and Humbert River Station and connects with Victoria River Downs, was used in the day for packhorses to carry goods and cattle were transported from Bullita and Humbert River stations. It’s a very rugged road used by men, horses and cattle in the heyday of cattle ranching in the Australian Outback.

Bullita Homestead is located in the southern part of the park and if you are going to check it out, it is recommended you go with a high clearance vehicle, a 2WD is fine as the road is not too rough. Here you will find the homestead and the stockyards, and you can find out more about the history and culture. The aforementioned Gregory’s Tree is another significant site which is also accessible by a 2WD

The park is known for its high concentration of different species. There are more than 1,000 native plant species, 334 native vertebrate species, 52 families of aquatic invertebrates and 58 species of cave invertebrates. It is the home to flora and fauna species that are special to the dry inland and the tropical north making it a significant ecological region. The diverse habitat of the park includes 15 threatened species such as three plants, five birds and two reptiles.

The park has more than 500 km (312.5 miles) of 4WD tracks through a variety of landscapes offering the visitors a great Outback experience.

There are several archaeological sites in remote part of the park such as Aboriginal rock shelters, caves with rock art dating back at least 20,000 years. These are protected from major visitor impact as they have a cultural significance to the Aboriginal people of the area.

Doing the Escarpment Walk is highly recommended. You will be met by some stunning scenery of the park during your hike to the top. The hike is not too strenuous, obviously depending on how fit you are. There are some steep sections but it is not too bad, but most of the hike is on a steady uphill trail. It’s a 3 km (1.9 miles) return walk and will probably take about 1½ hours.

You can choose to take the easier option and walk to the Garrarnawun Lookout which is about half way to the top. On the trail there are signs with the stories of the Nungali-Ngaliwurru and Wardaman people on how they reckon the landscape was created. Each of the cultures have their stories and both are told. The signs also have illustrations of typical Aboriginal artwork which is a nice little detail. The Nungali-Ngaliwurru story is about how the rainbow generated water which maintained life. The Wardaman story is on how the rivers were created and filled by a Black-headed Python. These stories are parts of a much greater story of these two cultures.

When you initiate the hike and you are at the foot of the escarpment you will be surrounded by grasslands, bush and the magnificent range. This is a good spot to take some photos of the escarpment from all sorts of angles.

When you get up to the Garrarnawun Lookout take your time to have a look around at the scenery and take some photos. You will have a great view of the Victoria River, the valley and the surrounding ranges. Furthermore you may be able to spot some beautiful bush flowers just nearby.

As you continue onwards and get to the top you will be on a plateau in a really cool rugged environment of deep cracks and rocks walls with grass and bush. You can take some really neat shots up close of the rocks alone or with the rocks and the ranges and the river as a backdrop. Have a stroll around at the top of the escarpment and take it all in. It is really beautiful. From here you can actually see the Victoria River Roadhouse as well.

When you return, you have to go back on the same trail as you came from. This way you will be able to take in the scenery from a different perspective, which is really cool as well.

After you have finished the hike you could drive down to the Victoria River Roadhouse further down the road. Visiting the roadhouse is a really cool Outback experience and it is the only place for miles placed in the middle of the remote wilderness. Have a stroll around the area and take it all in. They even have a pretty humorous front sign that you ought check out as well.