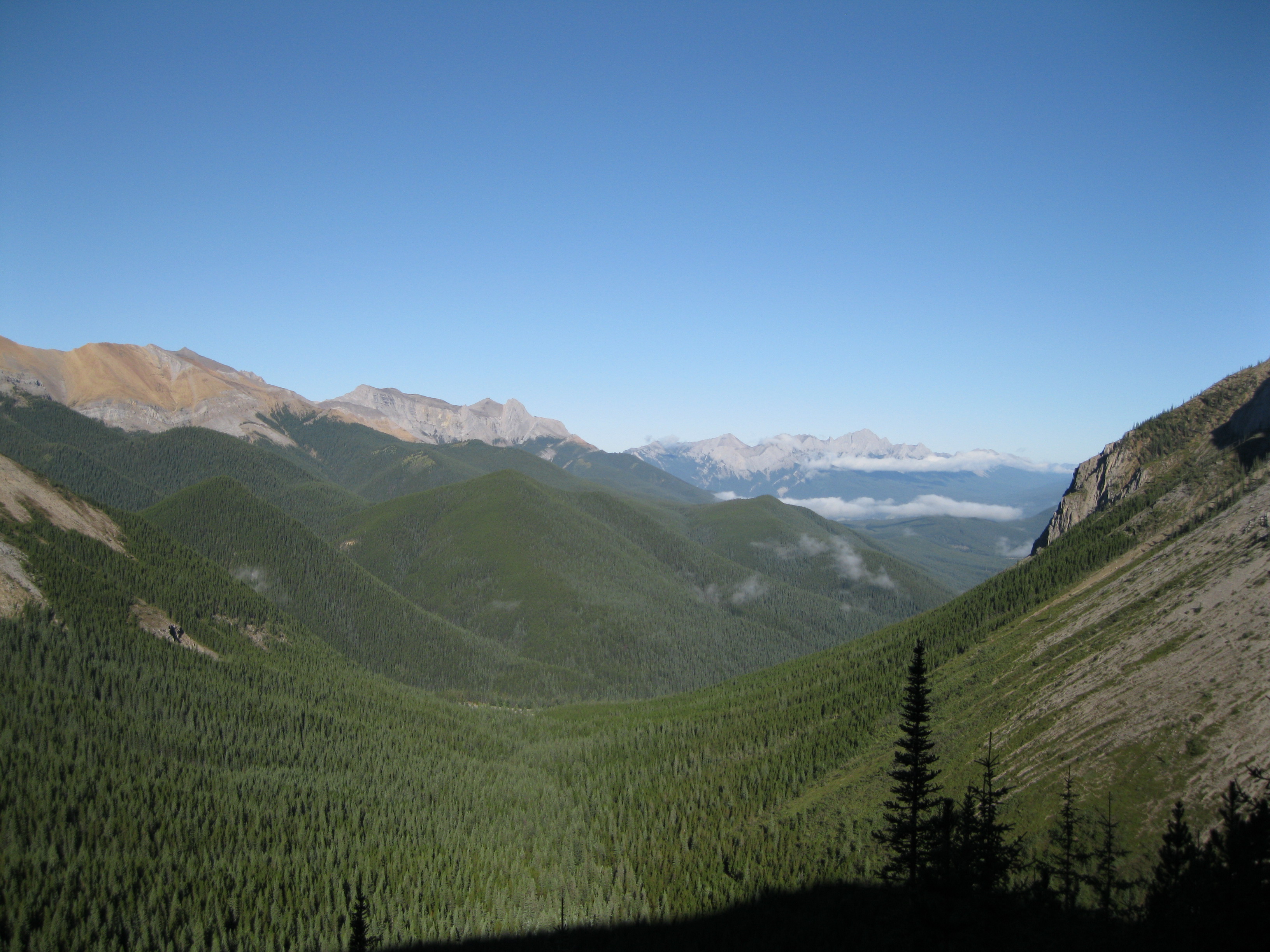 Jasper National Park is a very beautiful area of Alberta and is the largest national park in the Canadian Rockies. It is located north of Banff National Park and has a lot of stunning scenery such as mountains, lakes and glaciers of the Columbia Icefield.  The park was established in 1907 as Jasper Forest Park and was granted the status of a national park in 1930. It was named after Jasper Hawes who ran a trading post in the region for the North West Company.

There are plenty of options if you are into hiking. One option could be to check out Pyramid Bench. The Cottonwood/Pyramid Lake Loop is a nice trail. It is a bit steep to begin with, but not too strenuous, and will take you to Pyramid Lake which on a clear day should give you a great view of the lake and Pyramid Mountain. The lake drains into the Athabascan River through Pyramid Creek. There are plenty of other hiking options in this area as well. Just be aware however that if the weather is not clear you may not be able to see the mountain, but it’s still a good hike as you will have nice scenery on the way.

Checking out the Valley of Five Lakes is another possibility. As the name suggests the area consists of five lakes, and they are really beautiful. The lakes are appropriately named “First Lake”, “Second Lake”, Third Lake”, “Fourth Lake” and “Fifth Lake”. You have to admire the creativity of the people in charge of naming the lakes. You wonder how they came up with it. All five lakes are within walking distance from each other, the trail is a loop which is about 5 km long (3.10 miles). The hike can be done in a couple of hours, really depending on how much time you want to spend here, and is not strenuous. You can have lunch at one of the lakes and check out the view which is recommended. The Fifth Lake would be a good spot for that and this lake includes an island as well. Note the beautiful green tint in the lakes which are surrounded by wetlands and meadows.

Doing the Sulphur Skyline hiking trail is highly recommended. It’s a tad steep and depending on your fitness it can be a bit strenuous. You will get some absolutely stunning views of the valley, mountains and woods on the way. The distance to the Skyline summit is 4 km (2.5 miles) and the further towards the summit the steeper and rockier it gets. The duration of the hike as a round trip would be about 4-5 hours. If you commence early in the morning you should be at the summit around lunch time. This is a killer spot for lunch and you can stay up there for about an hour in total where you also have an opportunity to walk around and check out the breathtaking panoramic views. You will be able to see the Fiddle River Valley, Mount Drinnan and Ashlar Ridge which is really beautiful and furthermore the Miette Range and Utopia Mountain. Then return down the same way you came up and you will have the view from the opposite direction.

When you have finished your hike you could pay the Miette Hot Springs a visit which is located just at the end/start of the trail at the parking lot. It would be the perfect end to a great day which would just make it awesome.  These hot springs were used by the Indians, or First Nations People as they are also called in Canada, back in the 1800’s. A facility was constructed during the 1930s due to increasing popularity and also as a depression unemployment relief project. In 1986 the construction of a new facility was initiated a kilometre from the original building and today it’s a really cool facility. It is the hottest hot springs in the Canadian Rockies with temperatures at 54 degrees Celsius (129 degrees Fahrenheit) but it is cooled down to a more comfortable temperature of 40 degrees Celsius (104 degrees Fahrenheit).  From the parking lot you will have a perfect view of Mount O’Hagan which is quite impressive.

Going to the Athabasca Falls at the Athabasca River is a must. Close to the falls you will have great views of Mount Edith Cavell, Mount Hardisty and Athabasca Pass which is really beautiful. You can easily spend about an hour in this area. The height of the falls is 23 metres (75.5 ft) and is known for its beauty and for the force and the quantity falling into the gorge. There are different trails and viewing platforms in the area so you will be able to have some great views from all sorts of angles. The view of the powerful water streams down the gorge is really impressive and picturesque as well. If you walk to the end of the gorge you will be met by a very nice view of the Athabasca River and looking back you will see the towering rocks of the gorge behind you. You can go back and walk up on the rocks and have a bird’s eye view of the river as well. Good stuff.

Athabasca Pass is a route that crosses the Canadian Rockies and the height of land that forms the continental divide in Western Canada. It’s a linear corridor of access of the mountains and is composed of dramatic scenery of rivers, woods, glaciers, lakes and rock formations. It was designated as a national historic site in 1971 as for almost half a century from 1811 to the mid-1850s it was a part of the main fur trade between Canada and the Oregon country. The location was of strategic importance for both the Americans and the British as they wanted to extend their trade west of the Rocky Mountains. The fur trade had expanded west across the continental divide by 1810. The explorer David Thompson of the North West Company already had posts at the upper and middle Columbia River but when New York based fur trader John Jacob Astor entered the race the urgency to find alternative routes arose because of this increase in competition. Astor’s goal was to reach the Columbia River by ship around Cape Horn via a port and inland fur trading posts in what today is Washington State. If Astor was successful this could harm the business of the North West Company. Therefore Thompson decided to find a new route, also to get around the blockade of the Piegan Indians. The route was found in cooperation with Thomas the Iroquois using traditional Aboriginal knowledge. Thompson was the first white man to cross the Rockies through the Athabasca Pass. The route to the Pacific through the pass would be one of the most important East-West transportation links in Canadian fur trade history.

Visiting the Athabasca Glacier is an absolute must when you are in Jasper National Park. The glacier is a part of the Columbia Icefield and you have several options here. You can join the “snow coach” which is specially constructed to ride on the glacier itself. You can also join an ice hiking tour of the glacier which is really cool and highly recommended. By doing this you get to experience it up close and get a chance to view all sorts of cool features such as different streams and water falls in the glacier itself. The tour will be guided and you will be provided with interesting information which is very educational and a must if you are into nature and geology.

Like other glaciers around the world, the Athabasca Glacier is also effected by global warming. It is in constant motion, moving forward by several centimetres a day. Spilling from the Columbia Icefield over three massive bedrock steps, it flows down the valley like a frozen river very slowly. Currently it recedes about 5 metres (16 ft) a year and has receded more than 1.5 km (0.93 miles) in the last 125 years which is more than half its volume. Due to this you will find a moon-like landscape at the bottom edge of the glacier which in itself is pretty cool as well. The Athabasca Glacier is the most visited in North America, and note like other glaciers, that hiking on them can be dangerous. Therefore be a bit careful.

Opposite the Athabasca Glacier, the Icefield Interpretive Centre is located (closed during winter). You can purchase sightseeing tickets there, if you have not already been pre-booked, buy merchandise or rent a lodge.

The Icefields Parkway goes through Jasper National Park and stretches 232 km (144 miles) across amazing majestic scenery. This is some of the most stunning landscape you will ever see. It is highly recommended going on this route which will also take you through Banff National Park. It features glaciers, wildlife, lakes, beautiful mountain ranges and valleys. Driving through Icefields Parkway you seriously feel like stopping the car at every single corner you turn to step out and have a view of the scenery and take photos. Absolutely awesome. It parallels the continental divide and links Lake Louise with Jasper to the north. It’s really busy during July and August with up to 100,000 vehicles travelling through a month.