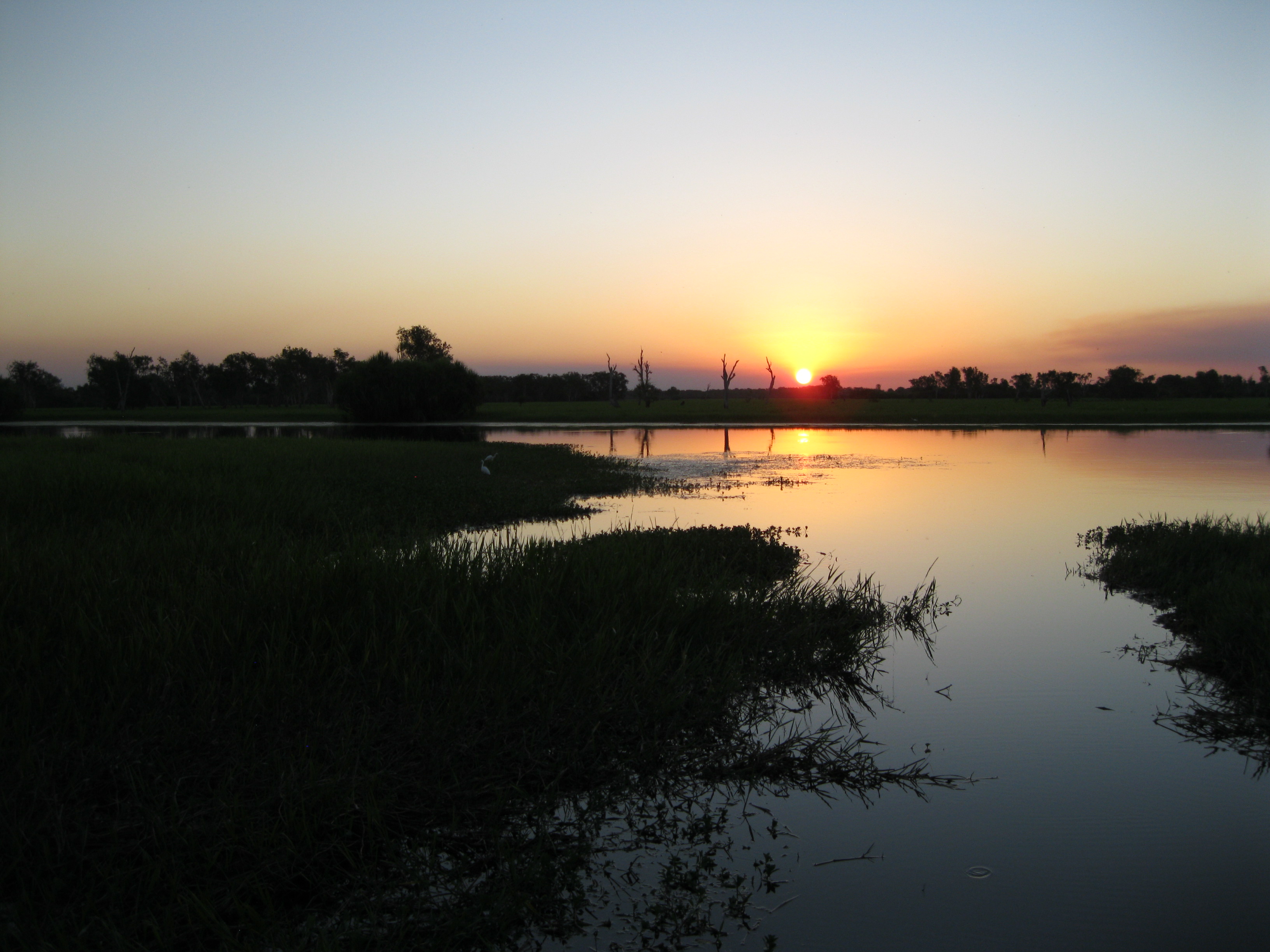 Kakadu National Park is a tropical nature reserve in the Top End of Northern Territory. The scenery is beautiful and there is a lot to see and do. The name Kakadu is a mispronunciation of Gagudju which is the name of the Aboriginal language formerly spoken in the northern part of the national park.

Kakadu has some of the oldest exposed rock formations in the world. 140 million years ago the area was under water and the escarpment seen today at Gunlom, Jim Jim and Twin Falls was the shoreline. The floodplains in the lowlands are relatively young and was gradually formed by sand and silt from eroded rocks being carried by wet season waters within the last 1,500 to 2,000 years. This landscape can be seen at places like Yellow Water and Ubirr.

An unconformity is a period of erosion where old rock is being eroded at the same time as new rock is being deposited. This can be seen at the Budjmi walking track lookout near Twin Falls creek crossing. Here 1,800 million year old granite was exposed by erosion and covered by the Kombolgie sandstone formation. This unconformity represents a break of 100 million years in time. You can see the difference in the colours. The granite is dark grey and sandstone on top of it is beige. Igneous intrusions which is molten rock forced up between cracks in surrounding rocks are also found. This type of rock is more resistant to the erosion that the surrounding rocks.

Rippled marked rocks can be seen, formed by the currents of a huge river which deposited the Kombolgie sandstone 1,700 million years ago. Cross-bedded rocks are also present in Kakadu which were created due to changes in the water flow while sediments are deposited. Furthermore conglomerates are found which were created by rocks carried by rivers and deposited where the water movement slowed and were then embedded in sandstone. The size of the rock documents the amount of water flow, so larger rocks were deposited in faster flowing water. The roundness depends on the how far the rocks travelled. The rounder, the more it has tumbled. This type of rock is present at Nourlangie.

Within the vast landscape there are six different main landforms which each contain a variety of plants and animals.

According to the Bininj/Mungguy Aboriginal people Kakadu has six different seasons. They have lived with the dramatic changes of the landscape for tens of thousands of years and the knowledge of this is the fundament for their culture.

Jabiru is the main township in Kakadu, built in 1982 to support the uranium mine 8 km (5 miles) away. The Bowali Visitor Centre is located here, there’s a small town plaza, and several campsite. The Crocodile Hotel which has the shape of a Crocodile is based in Jabiru as well

The East Alligator River is definitely worth checking out. It is one of five major river systems in the park and was named by explorer Captain Philip Parker King in 1818. He was travelling through and thought he saw alligators hence the name. The source of the river is about 150 km (93 miles) to the southwest in Arnhem Land. Both freshwater and estuarine crocodiles, also known as saltwater crocodiles, are found in the river but the latter is more common. Therefore be careful and don’t risk your life. You may see them on the banks or cruising around in the river. They are especially aggressive during the breeding season from April to October so stay in harm’s way of the river. If you sand in the water the estuarine crocodile can feel your heartbeat a kilometre (0.6 miles) away due to sensors on its body.

Going to Ubirr is an absolute must when you are in Kakadu National Park as you will see some great Aboriginal rock art and beautiful scenery. It’s a nice little hike from the car park via Mabuya, the Main Gallery and the Rainbow Serpent where you will see some great rock art. The age of the rock art can only be estimated but it’s believed that it is less than 2,000 years old due to the paintings of a long necked turtle and some fish which became common in the development of the floodplains about 2,000 years ago. In some cases you can see that more recent residents have painted over older art to illustrate their modern day life.

Thereafter you can continue to Ubirr Rock and climb the rock as which is not too hard. From the top of the rock at Nadab Lookout you will have a great view of the surrounding stone country and the floodplains. The area is fairly big so you can have a walk around and take some shots from all sorts of angles. Really cool.

In the Nourlangie Region the highlight here is Nourlangie Rock, another area with great Aboriginal rock art. There are several of walks you can do. There is a 1.5 km (0.9 miles) circular walk with shelters of interesting paintings. The Anbangbang Shelter drawings are among the most famous in the park and were last worked on in 1964. Another walk is on the western side of Nourlangie called Nangawulurr which can be reached through the wetland by a 3.4 km (2.1 miles) walk. It features x-ray paintings and contact art of European sailing ships. The rock itself is pretty impressive as well and can get a great view of the park from the rock.

The main attraction in the Yellow Water region is the wetlands. An option is to go to the Yellow Water Billabong and check out the sunset which is pretty stunning with the beautiful colours changing on the wetlands. There’s a boardwalk here which will provide you with an excellent lookout. You can also do a cruise here which is highly recommended. On this tour you will have some great photo opportunities and you may be able to spot some estuarine crocodiles, lots of birds and other wildlife. About a third of the bird species of Australia are found in Kakadu and at least 60 of them inhabit the wetlands.

Jim Jim Falls, in the Jim Jim Falls & Twin Falls region, is definitely worth a visit. It is a waterfall that descends of the Arnhem Land escarpment at an elevation of 259 metres (850 ft) and is right on the border to Arnhem Land. Mind you during dry season it the waterfall has dried out but it’s still worth going and it is a nice hike which is a 2 km (1.2 miles) return walk through monsoon forest over boulders to the plunge pool. The drive is quite a bumpy experience as well via gravel road where the last 11 km (6.8 miles) are only suitable for a 4WD vehicle. Much of Kakadu is believed to have been under water 140 million years ago, the escarpment was formed sea cliffs and the Arnhem Land plateau was the land above the sea.

In the Mary River Region is located in the southern part of the park where the highlights are Gunlom and Maguk.

Gunlom is a part of Waterfall Creek and is one of the major tributaries of the South Alligator River, the latter is the only large tropical river system to be fully protected within the park. Waterfall Creek begins 12 km (7.46 miles) from the waterfall at Gunlom. It is fed by 100 square km (38.6 square miles) of catchment from the Arnhem Land plateau and falls 70 metres (230 ft) into the 14 metres (46 ft) deep plunge pool. The creek then flows 1 km (0.6 miles) down to the South Alligator River. During the wet season this area is completely flooded with huge amounts of water flowing off the escarpment.

It is best to with Gunlom in the morning or evening as you will have the best possibilities of spotting wildfire during this time. Estuarine crocodiles are known to enter the lower part of the area, therefore be aware. Furthermore there are freshwater crocodiles as well which you should not interfere with either as they can be aggressive during mating season or when protecting their young.

Go for a walk, wearing the appropriate hiking footwear, bring plenty of water and remember to stay on the marked tracks. You can do the Gumlom Lookout Walk which is a tad strenuous and uphill but pretty cool as when you get to the top of the escarpment you will have a nice view of the South Alligator River valley and the Marrawal Plateau. The hike is about 1 km (0.6 miles) and when you get to the top you will be met by rock pools and a pretty waterfall where you can have a dip and sunbake a bit. When you are at the plunge pool do not jump off any rocks as it can be dangerous. Be a bit careful when entering the pools as the rock is slippery and shallow water can suddenly become deep the further you go out and vice versa.

Kakadu inhabits 25% of the freshwater fish of Australia such as the barramundi which are actually male until they are five years old and then change into breeding females. They spend most of their lives upstream in freshwater but enter estuaries to breed during wet season. During the dry season the plunge pool and the fringing forest supports a stunning wildlife from the smallest insects to the largest animals all depending on the permanent waters of Gunlom. During your hike you may see birds such as rainbow bee-eaters which are known for their acrobatic flying. They catch insects such as bees and wasps in flight and land on branches to squeeze out the slings before eating then. White-throated honeyeaters may be seen among leaves and twigs of trees looking for manna and insects or on paperbark flowers in search of nectar. The freshwater crocodiles mainly live of small fish and insects.

Another cool hike you can do is at Maguk. Here you can do the Maguk Plunge Pool walk which is a 2 km (1.25 miles) return walk which will take you about 1-2 hours depending on how much time you decide to spend at the pools. It’s a great bushwalk along Barramundi Creek (Maguk) through beautiful rock formations and you can either do the lower level or the top level. There is talk about closing off the top level though which is a shame as it’s really cool. The lower level is a big pool which will offer you get scenery but if you do the top level which is a bit more strenuous and uphill, you get to several levels of plunge pools which is so cool. Just remember not to do and jumping off cliffs.

Doing a scenic flight of Kakadu National Park and Arnhem Land is highly recommended. Among other things you will get to see the impressive stone country and bush of the two areas, the river systems, the occasional bushfire and the stunning escarpment to Arnhem Land.