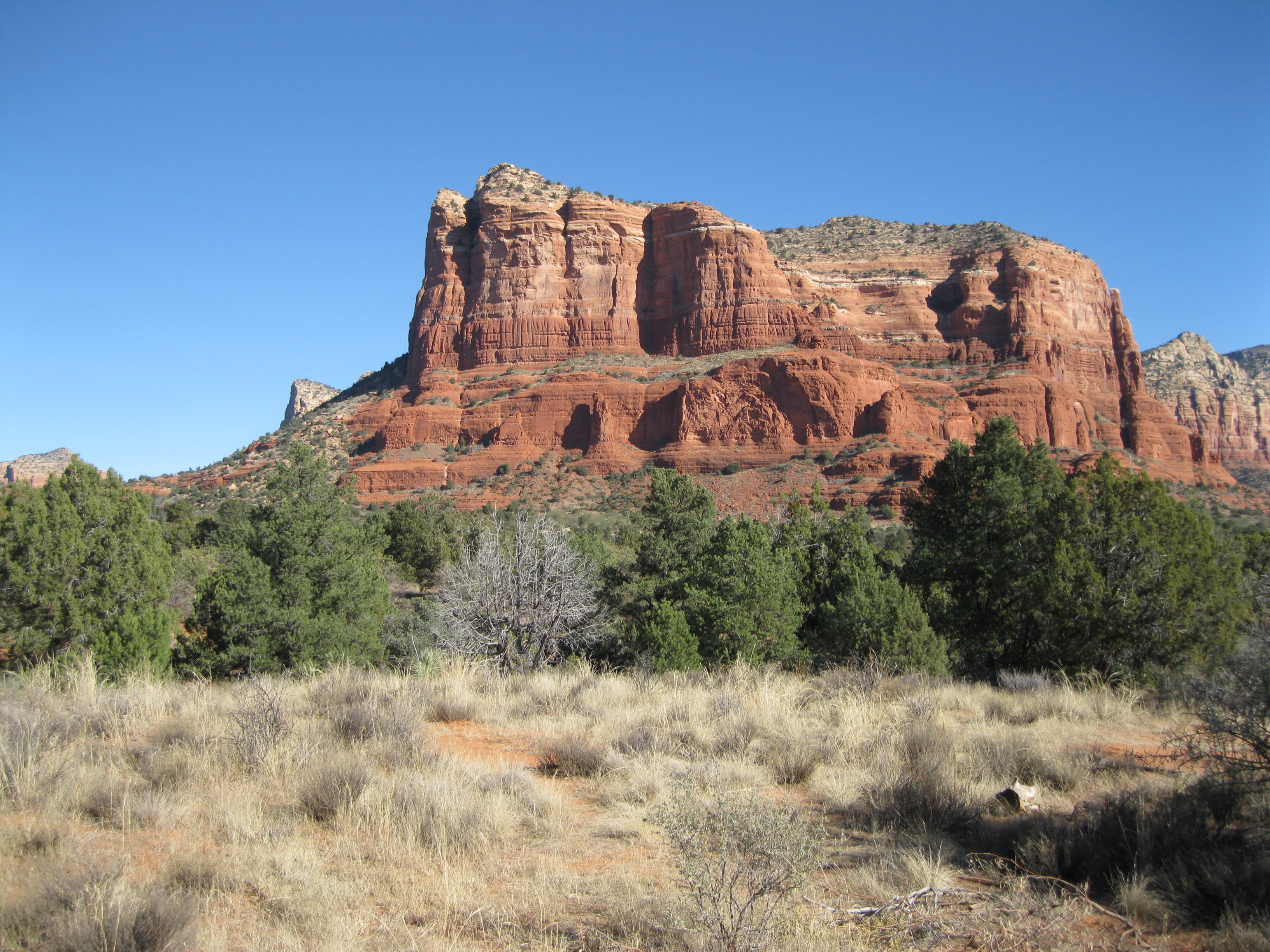 Coconino National Forest is a national park located at the city of Sedona in Arizona which is known for its stunning rock formations. You can easily access the national forest from Sedona or you can go there by joining a day tour from Phoenix.

Sedona is located at the base of the Mogollon Rim, an escarpment which is about 320 km (200 miles) long and runs east to west through the middle of Arizona. In the Sedona area, the rim has gradually been eroded creating very beautiful canyons and buttes. The red colour of the rocks is due to the iron oxide content. The steepness of the terrain is because the top layers of the sedimentary rock consist of basalt and limestone which are harder than the underlying rock. Water running off the edge of the escarpment eroded the lower layers leaving steep cliffs behind. The geology of Coconino National Forest is the same as the one of Grand Canyon, Zion, Bryce Canyon and Arches national parks and Monument Valley.

The park can be viewed by driving around the Sedona area or from the Chapel of the Holy Cross which is a good vantage point.  The chapel, which is located at 780 Chapel Road, is an interesting piece of architecture. It was built right into one of the red rock buttes of Sedona on Coconino National Forest land. The architect chosen for the project was Richard Hein and the design was created by August K. Strotz. It was commission by local rancher and sculptor Marguerite Brunswig Staude who initially wanted the chapel built in Budapest, Hungary but due to the outbreak of the 2nd World War she decided to build it in her native region. The Senator at the time Barry Goldwater assisted in getting a special permit for the construction. It was completed in 1956. Inside the chapel itself you will have a great view of Sedona and the surrounding area and the complex has a gift shop as well. Also from here you can view the most expensive house in Sedona valued at approximately 29 mill USD which is located at 503 Chapel Drive. The construction started in 2003 and was completed in 2008. The owner is Dr Loan Cosmescu who is the inventor of lasik eye surgery.

Sedona itself is a bit touristy but is still a nice and clean little town. There are plenty of art galleries, restaurants and bars in town and also loads of opportunities for shopping if you are into that.

There are more than 482 km (300 miles) of hiking, biking and equestrian trails going into Coconino National Forest but just bear in mind that this is a national forest and not a national park, so you are not allowed to camp here. Therefore the most convenient option, if you want stay in the area for several days, is to find accommodation in Sedona.

Some of the best known formations are Bell Rock and Courthouse Butte. Both are located south of Sedona and consist of horizontally bedded sedimentary rocks. There is a trail called the Bell Rock Pathway which is 5.8 km (3.6 miles) long and serves as a central corridor to several other loops and spur trails. On the way you will have great views of the aforementioned Bell Rock, Courthouse Butte and the Chapel of the Holy Cross. At the Bell Rock Vista parking lot you will have great views and opportunities to take some great shots.

Sedona also has some well-preserved Native American sites where you can learn about the history of the ancient Sinagua People who lived in the area from 1,400 to 1,100 BC. They are known for their craftsmanship within pottery, basketry and masonry. They made rock art, pueblos and cliff dwellings such as Montezuma Castle which is located about 40 km (25 miles) away from Sedona.

In spite of its rugged appearance the Red Rock Country is a fragile desert area. Plants grow slowly and the impact of thousands of human footprints make soils wash away easily. Until recently the human influence was limited even though people have lived in the area for 8,000 years. But now there are around 4 million visitors a year in the area which is as many as Grand Canyon National Park receives a year. Therefore take good care of the area so it can be enjoyed for generations to come.

There are also several tour operators who offer off road jeep tours, one of them being Red Rock Jeep Tours. This is a really neat way of experiencing the area. If you do the Soldier’s Pass trail there will be plenty of possibilities to view beautiful rocks such as Castle Rock and Coffee Pot Rock. This is a historic trail which was travelled by General Crook back in 1871. The jeep tour goes up dirt roads and up on some of the major rock plateaus as well. The first stop will be at Apache’s Seven Pools where you will have some amazing views. The tour will also take you to the Devil’s Kitchen sinkhole which is really cool. This hole looks like it’s about 20-30 metres (66-98 ft) deep, as it is covered by rock, but it is actually 256 metres (840 ft) deep. Really amazing how steep and straight the rock walls are. Just be careful when approaching the rim of the sinkhole and stay at least a body’s length away from the edge. The sinkhole was created by the collapse of gigantic underground caverns.  It will continue to enlarge with time and certain areas around the rim are at greater risk of collapse and some are at moderate or low risk. Safety precautions should be strictly adhered to as there is no certainty at the site. The policy with regard to jeep tours is that the viewing point is at the south western corner which is as safe as it can be. The most dangerous spot is at the very south wall where some people walk unaware of the danger.

Right next to the sinkhole the Schnebly Hill is located and you have great views of the aforementioned Coffee Pot Rock and Castle Rock. In this area you will be met by some amazing panoramic vistas as well.

On the way you will see plenty of prickly pear cacti which are said to be Walt Disney’s inspiration for Mickey Mouse. If you study the cactus closely and use your imagination you can see plenty of Mickey Mouses with the head and two ears. The prickly pear cactus is apparently good eating. It should be prepared and cooked the same way you would do a squash. Furthermore there are also many agave plants and juniper trees in the area.

Some of the residential buildings are pretty close to the park but these were built before the area was protected. As mentioned earlier, Sedona is conveniently close and when leaving Coconino National Forest it is only about a five minute drive away.